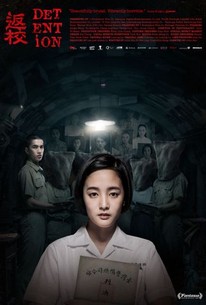 We're in 1962 Taiwan, during the time of the White Terror, with martial law in full force on the island. In this time of extreme repression, all ideas considered to be dissident are banned, and the culprits are tortured or executed. Tsuihua Secondary School is not an exception from this oppression. Despite close surveillance by the military police, Professor Chang (Fu Meng-Po) runs an underground literary club where he and his students learn about banned books and dream of freedom. One of his club members, Fang (Gingle Wang) is madly in love with him. The usually shy teenage girl from an abusive home manages to open up like a book in his presence. Then Chang disappears... One night, Fang wakes up at her desk, but the school has changed. As she wanders through the sinister corridors and other dilapidated rooms in search of her teacher, she meets Wei (Tse Jing-Hua). Together, they must confront the ghosts and deformed monsters that have taken over their alma mater, to find out what happened there.

For all the game's attention to the ways fear can become rooted in personal and collective psyches, this adaptation feels curiously depersonalized.

In gaming terms, this movie's characters find themselves on a screen where every move leads to a bottomless pit. The nightmare they're in is as existential as it is visceral.

Forgiveness and remembrance are intertwined in this powerful story. An apt heir to [Guillermo] del Toro at his most analytical, it's a stirring political fable dressed in the ghoulish weaves of a creepy monster flick.

In sidelining this sort of haughty regard for legalistic or precisely objective forms of truth, Procession sprints ahead of most nonfiction filmmaking -- and most journalism, too -- by actually contending with what counts.

The film mixes elements of monsters and haunted house scares with a political thriller to engage audiences. There are some odd narrative shifts and tonal changes but if you stick through to the end it all makes sense and is actually quite clever.

Looks fantastic, but ... never quite comes together in its conflicted impulses.

nterestingly enough, it is the film's very dedication in exploring character backstories and motivations that sets it apart from the original source material, that is Detention works better as a melodrama than as a horror movie.

The horror of Detention resonates.

Cinematographer Li Hsien-chou deserves praise for the immersive way that he has recreated the atmosphere of the game, working with sparsely decorated sets.

The film is gripping, a nightmare to watch-literally almost the entire movie is a nightmare-with moving acting, directing and a powerful story.

Detention delivers a stirring history lesson and an incisive commentary on the evils of authoritarianism, but its fractured and ride-the-rails ghost story does it no favors

This game adaptation may be no fun for the characters forced to face each additional horror, but it offers viewers a supernatural thrill facing off against the most menacing ghosts of history.

There are no featured reviews for Detention at this time.