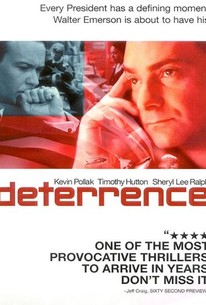 The world finds itself on the brink of nuclear disaster, with the balance point a small diner in Colorado, in the suspenseful political thriller Deterrence. In the year 2008, U.S. President Walter Emerson (Kevin Pollak), who recently took office after the death of the former chief executive, is campaigning for re-election. After winning the Colorado state primary, Emerson finds himself stranded in a roadside diner after a freak snowstorm. Traveling with Emerson are his chief of staff, Marshall Thompson (Timothy Hutton), national security advisor Gayle Redford (Sheryl Lee Ralph) and a network TV crew. While the president exchanges pleasantries with the diner's staff and customers, a new bulletin appears on TV: Udei Hussein, son of the late Saddam Hussein, has invaded Kuwait and butchered several hundred U.S. peace-keeping troops. Outraged, the president announces that if Hussein and his forces do not withdraw and officially surrender, he will begin dropping nuclear weapons on Baghdad. However, Iraq responds that if they are attacked, 23 cities in the United States and allied nations will be immediately destroyed in a counterattack. Emerson, his advisors, and the others trapped in the diner with them debate long and loud about what to do, and what the potential consequences could be. Deterrence was written and directed by former film critic Rod Lurie.

A president wrestles with another Iraq war.

The film begins and ends with footage of FDR intoning "I hate war," something the film takes two interminable hours to say.

Hardly the refried Cold War piece it longs to be.

The talk grows tired while the tension, alas, barely grows at all. And the ending is a cheat, pure and simple.

You just want to slap some sense back into yourself.

Lurie quickly glazes over one important bit of backstory in the early going, a point that is crucial to understand some motivation.

Taut and intense. Pollak is outstanding.

To it's credit, the film doesn't pull many punches . . .It really gets the message across that when you threaten someone with nukes, you'd better be ready to pull the trigger.

With a strong cast and smart script, Lurie conjures up an engaging scenario with little more than chicken wire and string.

he exciting thing about Deterrence is that *we* are the big scary bad guy who is acting irrationally - and yet the conclusion explains everything.

Only in Hollywood is ineptitude and crassness rewarded so richly.

I really REALLY like this one. The premise is simple, in a snowed in diner in the middle of Colorado the president gets stuck on the way to an air force base. The possibility of nuclear war ensues.

[font=Century Gothic][color=darkslategray] "Deterrence" is a movie set in the year 2008 during the Colorado presidential primary. During which, the presidential party is stranded in a diner in the middle of a blizzard. At which point, there is a news alert about Iraq invading Kuwait. "Deterrence" is a throwback to cold war thrillers such as Fail-Safe. Now, this movie is undeniably tense throughout(led by a fine performance with Kevin Pollak as the President) but the ending is a copout. [/color][/font] [font=Century Gothic][color=#2f4f4f] The movie has a larger problem which is that this movie was made in 1999 and the world has changed immensely since then. So, it's impossible to imagine Uday Hussein leading an invasion of Kuwait and Saudi Arabia now, much less breathing. In fact, it's hard to imagine Iraq presenting this much of a threat now, and not taking terrorism into question.[/color][/font]