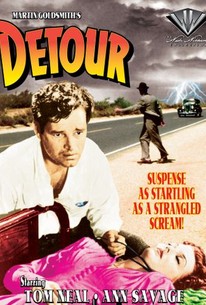 Critics Consensus: Stylish and gripping, Detour offers further proof that a patsy and a femme fatale often add up to a satisfying story.

Critics Consensus: Stylish and gripping, Detour offers further proof that a patsy and a femme fatale often add up to a satisfying story.

Critic Consensus: Stylish and gripping, Detour offers further proof that a patsy and a femme fatale often add up to a satisfying story.

Detour, called by many the ultimate "film noir," made on a shoe-string budget, and utilizing "night-for-night cinematography, creates a bleak, uncompromising, pessimistic nightmare world where its inhabitants can expect neither mercy, sympathy or justice. Al Roberts (Tom Neal) is the piano player in a sleazy New York nightclub. Sue (Claudia Drake) his girlfriend seeking stardom, leaves for Hollywood. Al follows, hitching a ride with a talkative, drug-addicted businessman who mysteriously dies during the trip. Al, frightened that he will be blamed for the death, hides the body in a ditch and assumes the businessman's identity. Needing company, Al picks up Vera (Ann Savage), a fellow hitchhiker who knows of Al's deception. Vera, hostile, agressive and with an annoying, nagging voice might be one of the most unbearably unpleasant female characters in a genre which celebrates wicked women. She blackmails Al, leading to one of the most memorable death scenes in film history. Directer Edgar G. Ulmer, limited to a six day shooting schedule, while crude and lacking in finesse, succeeds in creating a memorable, dark, nightmare world, uncaring, cynical and brutal. Detour is a bleak gem which has gained well-deserved cult status.

Tom Neal does extremely well in the long, difficult role of the petrified pianist whose misadventures are told in flashback; while Ann Savage all but blisters the screen with her venoemous, snarling performance as the vicious Vera.

[Detour] is a morbid melodrama, depressing and uninteresting.

One of the most poignant and disturbing stories to reach the screen in any year is this one. You're not just looking at a picture; you're right in it and suffering along with the man whose troubles are being told.

The film, told in flashbacks, is held together by a poetically lurid interior monologue and directed, by Edgar G. Ulmer, with harrowingly expressive effects of light and shadow.

One of the most daring and thoroughly perverse works of art ever to come out of Hollywood.

...a quick, grimy, and above all else guilty picture.

Ann Savage, who plays a no-good, does a beauty of a job... We feel you will have a bond of sympathy for Neal, both in person and story and that always makes for a good show.

How fate can play tricks on a man is satisfactorily demonstrated in a melodrama with enough bite to command the attention closely throughout.

It Is a not-too-late-believable story of a piano player who ruined his life by hitch-hiking from New York to Los Angeles to marry his girl -- but it is told bluntly and briskly Local Vaudeville by Director Edgar Ulmer.

Venturing far from the familiar melodramatic pattern, director Edgar G. Ulmer has turned out an adroit, albeit unpretentious production about a man who stumbles into a series of circumstances which seal his doom.

In one strange sequence a piano player, our downtrodden hero, lays down classical chops only the long hairs at Carnegie Hall could appreciate in front of a dive nightclub crowd that's barely awake. Even our hero seems not to care, and there's the charm of this nightmare: when he says or thinks "nobody cares" he's right, like a slow walk to the bathroom to slit your wrists. The dialogue is beautiful, the ending too quick, too pat, but the whole is like a two-year-old's pout dramatised. Visceral stuff.

Pleasantly short and well-constructed, Detour may not be the most memorable work of film noir, however it is well-acted and features an intriguing plot. It's fun to watch and follow, especially due to Savage's great performance.

This film, labeled a B-movie noir, has become a cult classic and has been historically preserved for future generations. The film is often downgraded to B-movie status for its short running time and its fast pace, but the film is concrete and tight when it comes to the plot, the calculated action, and suspense. The cast includes unknowns who each give astounding performances filled with wit and danger. The entire film feels like a sad, methodical episode of "The Twilight Zone" and yet remains grounded in real life circumstances. The lead actor, Tom Neal, plays Al, a pianist who is hitchhiking across the country so he can reunite with his girlfriend in Hollywood. They've already said their goodbyes and split, so at least it doesn't start with him being optimistically happy. Things go from bad to worse as Al is picked up by a wealthy man in his car and driven near his destination. The problem is that the man suddenly dies for no apparent reason, and Al fears that he will be charged with the man's murder unless he disappears completely. His ill-chosen decision leads to him being extorted by a bothersome hitchhiker herself, who doesn't adhere to regular noir rules. His tale ends in travesty as he keeps making the wrong decision time and again, and as he continues to run and lets himself get extorted by Vera (Ann Savage) his fate becomes more and more certain. The entire film is one long tirade against Tom as he fights to get to Hollywood, tries to find some semblance of happiness, and yet he can't escape one simple mistake that wasn't even his own fault. The film moves so fast that you're not sure where the action is going to come from next, it's gritty, doesn't play by the rules of many of the previous noir films, and it tells a story that seems old as time but feels as gut wrenching and spell binding as ever.

Doh! Hate it when I think I there is a great movie that I haven't seen - and it turns out I've actually seen it. Pretty killer z-budget noir. Great femme fatale / nagging sloppy drunk live-in girlfriend. Lesson: fate will crush a wus, everytime.