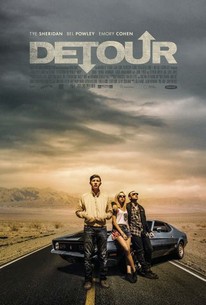 Harper (Tye Sheridan), a seemingly naive law student, obsesses over the idea that his shifty stepfather was involved in the devastating car crash that left his mother hospitalized and comatose. He drowns his suspicions in whiskey until he finds himself suddenly engrossed in conversation with volatile grifter Johnny (Emory Cohen) and his stripper companion, Cherry (Bel Powley). As daylight breaks and the haziness of promises made becomes clearer, how will Harper handle the repercussions--not to mention the violent duo--on his doorstep)? Employing a split-narrative structure to tell this tale of deception and murder, Christopher Smith takes his audience on a thrill ride full of hairpin turns, where it's never quite clear what or who can be trusted.

Nick Rasenti
as Friend of Johnny

Dylan Edy
as Friend of Johnny

Even with all the nods and winks, the derivations and homages, Detour is good dirty fun.

A watchable young cast, led by Brooklyn's Emory Cohen, and some time-shifting narrative shenanigans can't quite rescue Detour from the annals of also-ran western noir.

Sheridan, Cohen and Powley are a terrific trio in a stylish crime thriller that takes us on a trip through the seedy side of California and beyond.

In Detour, Smith gives us a sprawling, petulant road trip movie, paying homage to the genre greats that came before it.

Neither narrative is particularly compelling, but the road trip one has an edge, because travel's always fun.

Even with three of the big screen's most dynamic up-and-comers at its center, there's no flesh and blood beneath all the posturing.

The characters are never Characters, Capital C for Characters, like they need to be for something this stylized to take

The film develops in a way that could have gone gimmicky but works here, something in great part due to the editing by Kristina Hetherington and cinematography by Christopher Ross.

Lives up to its title in a more literal sense... it is merely a waste of time.

Detour is not quite great, but it is one crazy mile along the road.

Lauren Humphries-Brooks
We Got This Covered

A loving attempt to tackle a familiar genre, the film does everything it can to speed into new territory. Alas, it gets lost along the way.

There are no featured audience reviews yet. Click the link below to see what others say about Detour!