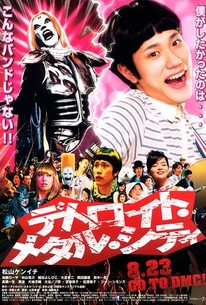 Reflecting the Japanese fascination with western culture, this musically-charged comedy concerns Souichi, a sweet natured, slightly backward pop fan who aspires to recording stardom. He naively moves to the city of Tokyo expecting to hit the charts overnight as a pioneer of soft, sentimental romantic ballads. Naturally, that doesn't happen, but Souichi encounters even greater success with an oddball gig that involves donning demon makeup and a black cape as a front man for the band Detroit Metal City. By day, Souichi remains the ineffectual and timid young man well-liked by everyone; by night, he's a crass, loud, frightening monster named Johannes Klauser II who earns his paycheck screaming rants onstage about rape and murder, to the delight of thousands of shrieking goth metal fans, some of whom actually believe he is a demon incarnate. His life grows problematic when he reencounters and falls hard for a university crush, Ms. Aikawa (Rosa Kato) - an equally timid, beautiful young pop critic who will almost certainly disapprove of his lifestyle after dark - if she ever finds out. ~ Nathan Southern, Rovi

If you're a fan of the manga, DMC might be worth checking out. Just keep in mind that it exists in its own "realistic" world and therefore is coming from a different place than the truly rude and terrific source material.

Fuckingham Palace is the greatest album title ever. Though the movie pretty much relies on one gag, a little girlie man being the lead singer of the #1 Death Metal band in the world, it's a very funny gag. Also, it's fun to see "L" from Death Note sing songs about cheese tarts and dance to a tambourine. I did like the idea of how dreams are different and each one is to be respected to boot. Definitely worth a watch at the very least.