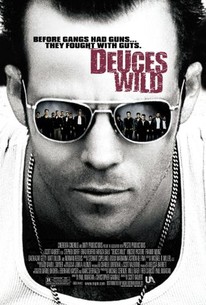 Critics Consensus: Melodramatic and weighed down with silly dialogue, Deuces Wild is a forgettable, overheated thriller that leaves no cliche unturned.

Critics Consensus: Melodramatic and weighed down with silly dialogue, Deuces Wild is a forgettable, overheated thriller that leaves no cliche unturned.

Critic Consensus: Melodramatic and weighed down with silly dialogue, Deuces Wild is a forgettable, overheated thriller that leaves no cliche unturned.

This gang warfare drama is from director Scott Kalvert, whose previous film was the controversial and violent The Basketball Diaries (1995). In the sweltering summer of 1958, Leon (Stephen Dorff) and Bobby (Brad Renfro) are leaders of the Brooklyn street gang known as the Deuces. When their brother Alley Boy died from an overdose, the two toughs vowed to keep narcotics out of their turf, but now they're being muscled by a new and more powerful gang called the Vipers, fueled by drug money and led by mobster Fritzy Zennetti (Matt Dillon). As a vicious gang war heats up that will determine Brooklyn's future, a romance develops between Bobby and Annie (Fairuza Balk), the leader of a girl gang. Deuces Wild co-stars Frankie Muniz, Balthazar Getty, Max Perlich, Drea de Matteo, Deborah Harry, Vincent Pastore, Joshua Leonard, James Franco, and Johnny Knoxville.

Maybe if the movie had left all the expensive period artifacts, and most of the hackneyed script, on the street corner and let its capable young cast loose, Deuces Wild would have offered the audience a more interesting game.

It not only promotes every stereotype and invokes every cliché of Brooklyn lore, it combines them all into an insulting composite, fuses that to the chrome-and-fins of the pointless Fifties, and then -- weirdly -- pretends it's Shakespeare.

Skip it. Just fill in the blanks and you too can brew the same bland, goopy mixture.

A flashback to a heroin casualty on a rain-soaked playground is a crucial visual aid, but any punch-drunk victim of Deuces Wild might prefer the needle to the damage done.

This is a movie that can't say no to a melodramatic opportunity, and whatever verisimilitude inspired Paul Kimatian and Christopher Gambale to write a script based on Kimatian's memories of the gangs has been utterly lost along the way.

Scott Kalvert's attempt at a gangster picture is the worst film of 2002.

It's full of sound and fury, and the ensemble tries hard, but mob boss Fitzy has it right: They're just kids who need to grow up.

This clichéd tale of combative Brooklyn street gangs in the late 1950s gets it so wrong in so many ways, it's almost cruel to count them.

Deuces Wild's not worth anteing up the ticket price.

What died in here, and who can we call to take its carcass away?

If it was the intention of Kalvert, Gambale and Kimatian to infiltrate their script with every stereotypical hoodlum cliché from every movie covering Brooklyn bad boys, they were on the money. Too bad their movie isn't.

While this movie is completely ridiculous and corny, it's still fun to see Stephen Dorff being the bizarre person he is. There's actually some really good things about the movie, there's some very decent acting from Brad Renfro and Balthazar Getty, but the majority is just a rip-off of various other gangster movies. There's really nothing that hasn't been seen before and the characters aren't interesting enough to make it memorable. Visually it's pretty bland too.

Not bad, too cliche at times and predictable resolution, but still not bad. I guess it helps that i'm a sucker for 50s retro stuff. Fairuza Balk also looks hot in some kind of weird way.

An explosive gangland drama, the best film of it's kind since The Outsiders. An electrifying film that explodes with action and a powerful cast of superb talents and gifted new comers. It has style and groove thats all it's own