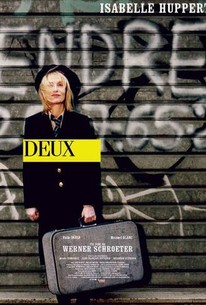 Avant-garde director Werner Schroeter's Deux (Two) is a willfully disjointed film about twin sisters played by Isabelle Huppert. As newborns, the two girls were separated. The film intercuts snippets from their lives. One of the sisters engages in some homosexual experimentation, while the other has ongoing conversations with a man (Jean-François Stévenin) who apparently resides in an opera house (opera being one of the director's career-long obsessions). Bulle Ogier plays a woman who may or may not be related to the two women played by Huppert. Deux was screened during the Director's Fortnight portion of the Cannes Film Festival.

Due to its lack of structure the film made no sense to me, and was enjoyable only in random artsy-fartsy sequences.

There are no featured reviews for Deux (Two) at this time.