The Devil and Miss Jones1941 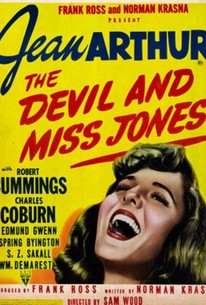 The Devil and Miss Jones Photos

The Devil and Miss Jones is a social comedy with left-wing undertones. John P. Merrick (Charles Coburn), the world's richest man, gets word that someone is trying to unionize a department store that he owns. To thwart this blatant act of democracy, Merrick changes his name and takes a menial job at the store, the better to catch the union activists without detection. Once he himself is subjected to the humiliating treatment afforded his employees, Merrick starts to wise up -- and soften up. As things develop, it is Merrick himself who spearheads the union movement after discovering how duplicitous his hand-picked executives can be. The film also introduces Jean Arthur and Robert Cummings as fellow employees who fall in love before fadeout time. Keeping with the film's insistence upon equal treatment for everyone, Merrick himself is permitted a romance in the person of Elizabeth Ellis (Spring Byington). The Devil and Miss Jones was written by Norman Krasna and directed by Sam Wood. ~ Hal Erickson, Rovi

Critic Reviews for The Devil and Miss Jones

It has grand humor, enjoyable characters, and plenty of heart - which helps to overlook the rather swift, clean outcome - as it builds to a warm, hopeful conclusion.

I liked it because it constitutes a social satire of the best quality, and because the dialogue is written with sharp ability. [Full review in Spanish]

A pleasant cornball comedy in the mode of Capra.

Audience Reviews for The Devil and Miss Jones

Talk about your hidden treasures! This film is under the radar for one reason only: character actors Charles Coburn and Spring Byington step from behind the shadow of the leads and take a bite out of the script themselves, and man, what a bite. Not to say that Jean Arthur and Robert Cummings don't do their part, because they do, but the emphasis here is on the old folks for a change, and its a refreshing change. There's also a scene on Coney Island, back when it was the shizzle, and its a wonderful scene for warmly placing you there in the midst of a steaming humanity all trying to cool off. There's a Caprasque story impetus about the problems of the rich versus the poor, along with some liberal solutions to those problems, but what's really nice is about watching folks who are past redemption finding it at the most unexpected time of life. Hope for everyone here. Too bad its only a movie.

A very cool movie, I think all our corporation owners and top people should follow the main character's example in this movie. I highly recommend this film.

John P. Merrick (Charles Coburn), a bigtime businessman (the "richest man in the world") is upset that the employees of one of his "small holdings" (a department store) are burning him in effagy, and wants to get to the bottom of things. Rather than sending in a private detective to infiltrate the organizers, he decides to get to investigate the situation himself. Rather than the group of lazy rabble-rousers he expected to find, he's instead greeted by a group of caring and well-meaning individuals who look out for one another. It's something a bit foreign to him, this concept of people liking one another. He's especially bowled over by Miss Jones, an almost saintly figure in comparison to the miserly board members he's used to associating with. Mary Jones (Jean Arthur) seems to be a friend to everyone in the department store, and, under the mistaken impression that Mr. Merrick is a down-and-out tramp who's just found a job, is quick to offer him lots of helpful advice. As Merrick gets a firsthand look at the sort of treatment the average worker gets from the supervisors, he makes little notes in a notebook of DOOM for those who treat him cruelly. Things get complicated when he finds out the chief rabble-rouser is none other than Miss Jones own boyfriend. It's really amazing how quickly Mr. Merrick gets into the persona of a common working man, almost immediately identifying with all the problems facing them (which is a huge jump from the way his character is introduced). As his moral change happens rather quickly, the rest of the movie is sort of a "secret identity" type caper, where Mr. Merrick is constantly on the verge of being discovered. "A madcap comedy of errors", I suppose is the term. While Jean Arthur's charming performance really shines, it's famous character actor Charles Coburn makes this film great. Coburn (1877-1961), who didn't appear in film until the age of 56, also had roles in "Gentlemen Prefer Blondes" and Howard Hawks' "Monkey Business". I don't think he was ever finer than he was here.

The Devil and Miss Jones Quotes