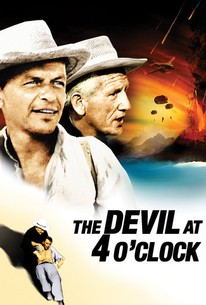 Spencer Tracy plays an American priest tending to the natives of a South Sea island. A plane carrying three convicts -- Harry (Frank Sinatra), Marcel Gregoire Aslan and Charlie Bernie Hamilton) -- lands on the island; Father Doonan (Tracy) manages to enlist their (reluctant) aid in working at a children's hospital. When the island falls victim to a series of earthquakes, Father Doonan and the convicts work together to evacuate the hospital staff and the children. Harry, the least cooperative of the prisoners, becomes a hero during a volcanic eruption by going back to rescue the priest, who with convict Charlie has been holding a bridge in order to allow the others to escape. Father Doonan and the two convicts are killed, but all the children are rescued. Blighted by bad special effects and ponderous direction, Devil at Four O'Clock is less interesting than the behind-the-scenes rumors concerning the friction between Spencer Tracy and Frank Sinatra.

Alexander Scourby
as The Governor

Robin Shimatsu
as Marianne
View All

Critic Reviews for The Devil at 4 O'clock

The story has its share of hokum but Tracy's performance has guts and honesty.

The plot of Mervyn LeRoy's adventure is routine but the special effects are good (for its time) and it's well acted by Frank Sinatra as a convict and Spencer Tracy, again playing a priest.

Colorful disaster movie with good teaming of Tracy and Sinatra.

The special effects were fine, and were about all that was salvageable from this disaster of a film.

Audience Reviews for The Devil at 4 O'clock

Starts off well but bogs down in the middle and never really recovers.

The Devil at 4 O'clock Quotes