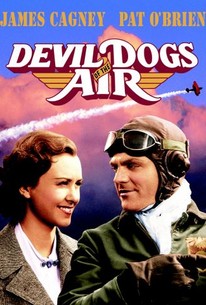 Devil Dogs of the Air Photos

Warner Bros.' Devil Dogs of the Air is very much a "formula" picture -- but what a wonderful formula it is! James Cagney plays reckless stunt flyer Tommy O'Toole, who is encouraged to join the Marine Flying Corps by his old Brooklyn buddy Lt. William Brannigan (Pat O'Brien). An undeniably talented flyboy, Tommy is also brash, obnoxious and pugnacious, quickly earning the enmity of his fellow trainees. He even falls out with Brannigan over the affections of pretty waitress Betty Roberts (Margaret Lindsay). Very nearly "washing out" of the service, Tommy is eventually brought into line by the combined efforts of Brannigan, Betty, and the rest of the "devil dogs." After earning oodles of money for Warners during its first release, Devil Dogs of the Air proved equally as successful when it was reissued six years later, just before America's entry into WW II.

William B. Davidson
as Adjutant

Critic Reviews for Devil Dogs of the Air

A follow-up to the Cagney navy picture. Lacks plot.

The United States Marine Service placed itself unreservedly at the disposal of Warner Brothers to make this picture, and the result, technically speaking, is highly impressive.

This is a standardized Cagney vehicle, turned out from the mould. I think it is time they broke it and tried a new one.

It's really a showcase for Cagney's cocky charm and smart-aleck attitude...

There are no featured reviews for Devil Dogs of the Air at this time.

Devil Dogs of the Air Quotes