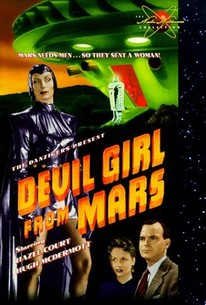 At a quaint Scottish inn, several disparate travelers are gathered for relaxation. Their vacations are disrupted by a beautiful Martian (Patricia Laffan), who explains that her planet needs men for breeding purposes. The film is a British production.

Sadly, the PVC-clad Nyah is a crashing bore.

Sounds juicy huh, the poster helps with a full length image of female character Nyah (Patricia Laffan) in an all black, skin tight catsuit, rawr! Laffan actually wears a black mini skirt and black stockings in the movie, so no catsuit. Better or worse? Hmmm...its all good. OK back to Earth with a bump. The plot for this movie is clearly from the mind of a (possibly horny) male. Nyah of Mars lands on Earth for one sole purpose, she is looking for youthful, strong males to take back to Mars in order to boost the planets dying male population. Why are the men dying on Mars? Possibly from being fucked to death by dominant girls like Nyah? (oh my!). No, there was a battle of the sexes and somehow the women won. This also led to all males on Mars becoming impotent, why? Possibly from having their balls crushed underfoot by the dominant ladies? Perhaps, I don't really know, but these sexy space ladies go around dressed in these ultra dominant, ultra sexy looking outfits. I guess I could cope with that. Although Nyah isn't specifically on Earth for sex slaves, that's immediately what springs to mind because you just can't help it. And straight away the movies plot is totally compromised because you don't care about the humans or their problems, you just wanna go with Nyah back to Mars to be her personal doormat. K, back from the bathroom, had to splash some cold water on my loins. Right so Nyah lands in the remote Scottish Moors and comes across an inn with various occupants. Each occupant has a different story behind them which is completely and utterly of no interest believe me. Nyah must decide which human to take back to Mars and what to do with the rest, and that's pretty much it. So straight away, why doesn't Nyah lift off and go elsewhere with more humans to choose from? This inn is owned by an elderly Scottish couple (one of whom is played by [i]Dad's Army[/i] star John Laurie) who are of no use, and various other random people of various ages. Of course the women are of no use so that's three people out, this leaves Nyah with little choice really. A loud mouth American, an elderly professor (always a professor), a child, a convict and a hunchback. Slim pickings right there, maybe fly to a bigger town Nyah? Oh and she kills the hunchback with her sex ray...I mean ray gun! So that pretty much leaves her with only two men to choose from, oh man the tension! In general this movie plays out in a very simplistic manner, and it goes like this. Nyah enters the inn and jabbers on about how powerful she and her race are and how she will do as she pleases. The scared locals look and listen intently and then when Nyah leaves they discuss what to do. Then Nyah will come back into the inn sometime later and pretty much do the same thing again, the locals listen and then when she leaves they continue with their chatter about what to do and various other mundane side plot issues of relationships and whatnot. Then Nyah will enter the inn again, but this time she might take someone back to her ship to show them around or show them her personal killer robot. Then said person or persons will go back to the inn and talk about what happened and so forth. Honesty this is the most boring sci-fi thriller I think I've ever seen. All the people in the inn are dull as dishwater and they literally don't do anything of interest throughout the entire movie. The only tiny bits of interest involve Chani the robot (pre-Robbie the Robot!) who shuffles around and disintegrates things, and the part where Nyah zaps the hunchback with a grin on her sexy face. Other than that the whole thing looks and plays out like some amateur theatrical production. Although, credit where credits due, the space ship model effects were quite good, ditto the space ship set which was pretty big. Chani the robot was basic but reasonable as was the ray gun effects. But the finale explosion for the alien craft was one of the best explosions I've seen in these early films. It looks like they shot a small sequence with clouds of smoke expanding, or possibly a liquid. There are many problems with this movie, the fact that nothing actually happens, there are set ups that don't go anywhere (Chani the robot), the fact that Nyah lands intent on grabbing a male but spends [b]so[/b] long in doing so and merely walks back and forth between her ship and the inn. It all seems so pointless really, after everything has played out Nyah finally decides to take one male back with her only for that male to (somehow) sabotage her ship and its blows up. What a waste of bloody time! Presumably the political message here (for the time) was focusing on gender equality, but I'm not really sure that comes across as it feels more like a male fantasy to be honest (outfit much?). The movies title and poster are misleading, as per usual, as they both lure you in with promises of cheap thrills. I suspect back in 54 Nyah's outfit probably was a thrill (it ain't too bad now) but that simply can't bail this stale offering out.

What's great about the 50's sci-fi era is that there's an overabundance of movies made of this type and you're likely never to run out of things to watch - if that's your thing. It's not really mine, but I try to be fair and give everything a shot. Basically everything that came out after The Day the Earth Stood Still is either a rip-off or an echo of it, and Devil Girl From Mars is no different. Despite that, it actually manages to be at least a mediocre effort. Things are set up early on and paid off later, the characters all actually have something to do in the story and the effects are decent without really being amazing. The biggest draw to the movie, in my opinion, is Patricia Laffan as Nyah the female alien. Intentionally or not, she comes off as a dominatrix who in the story is looking for men to bring back to her planet for procreation. Now that sounds very juvenile, but the characters don't care for the idea of going back with this lady, even though she is kind of sexy if you ask me. The movie doesn't really go anywhere and they made the alien way too menacing and indestructible for the story, but whatever. It's not a bad movie and it's pretty well-made so check it out.

This is a strange movie storywise, but otherwise it's a formulaic 50s sci-fi movie. I don't think it's worth taking the time to watch really.