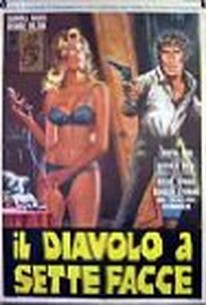 Carroll Baker, the blond starlet best known for her role in Baby Doll, ended her career in a number of Italian giallo thrillers including A Quiet Place to Kill, Paranoia, The Fourth Victim, and this giallo-tinged crime film from director Osvaldo Civirani. Baker plays a dual role as translator Julie Harrison and her twin sister Mary. The serpentine plot begins as Julie tells her lawyer Dave Barton (Stephen Boyd from Ben-Hur) that Mary's life is being threatened in London while Julie herself is being stalked by a mysterious stranger in Amsterdam. Dave's racecar-driving friend Tony Shane (George Hilton) saves her from both an attempted kidnapping and an attempted murder before putting her up with an old blind woman to hide. The blind woman is murdered that same night, and Luciano Pigozzi turns up as an insurance investigator who finds out that Mary has stolen a precious diamond from an Indian Maharaja, double-crossing her husband to do so. To reveal any more of the plot would rob the viewer of the jaw-dropping developments, but the film features an unbelievable prank played by Julie's knife-wielding co-worker in a gorilla mask, a speeded-up car chase reminiscent of Rat Pfink a Boo Boo, and a very odd denouement in an abandoned windmill. The cast is loaded with genre veterans like Lucretia Love, Carla Mancini, Franco Ressel, and Ivano Staccioli, and the familiar-sounding score is by the ubiquitous Stelvio Cipriani, making this a solid addition to any giallo library. Various versions run 89 and 87 minutes. ~ Robert Firsching, Rovi

There are no critic reviews yet for Il Diavolo a sette facce (The Devil Has Seven Faces). Keep checking Rotten Tomatoes for updates!

There are no featured audience reviews yet. Click the link below to see what others say about Il Diavolo a sette facce (The Devil Has Seven Faces)!