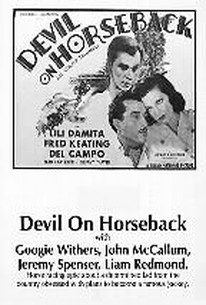 Real-life husband and wife John McCallum and Googie Withers top the cast of Devil on Horseback. A racetrack drama, the film centers on the activities of natural-born jockey Moppy Parfitt (Jeremy Spencer). As he gains prominence on the track, Moppy becomes insufferably egotistical. His "win at all costs" policy ultimately results in the unecessary death of a horse. Much to the delight of horse owner Charles Roberts (McCallum) and trainer Mrs. Cadell (Withers), Moppy finally learns that there's something more to being a jockey than just talent. Prominently featured in the supporting cast is Liam Redmond as a bibulous ex-jockey named Scarlett O'Hara (sic!) ~ Hal Erickson, Rovi

Critic Reviews for Devil on Horseback

There are no critic reviews yet for Devil on Horseback. Keep checking Rotten Tomatoes for updates!

There are no featured reviews for Devil on Horseback at this time.