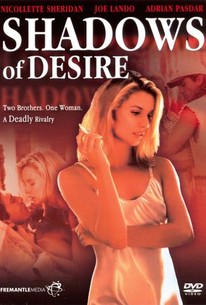 Set in Utah (but filmed in Texas), the made-for-TV Shadows of Desire will probably seem fresh and original to anyone who hasn't seen the old Katharine Hepburn-Robert Taylor-Robert Mitchum theatrical feature Undercurrent--or, for that matter, to anyone unfamiliar with the Biblical story of Cain and Abel. Central to the plotline is Rowena Ecklund (Nicollette Sheridan), a woman torn between her sincere love for the kindly, sensitive Jude Snow (Adrian Pasder) and her insatiable lust for Jude's arrogant, dangerous older brother Sonny (Joe Lando) (guess which brother has the longest hair and the sweatiest shirt?) The passions engendered by this triangle are matched only by the all-stops-out histrionics of Piper Laurie as Jude and Sonny's domineering mother Ellis. Originally telecast September 20, 1994, on CBS, Shadows of Desire has since been rerun on cable television and on Canadian TV under the title The Devil's Bed.

Brandon Smith (I)
as Bobby

Critic Reviews for Shadows Of Desire

There are no critic reviews yet for Shadows Of Desire. Keep checking Rotten Tomatoes for updates!

There are no featured reviews for Shadows Of Desire at this time.