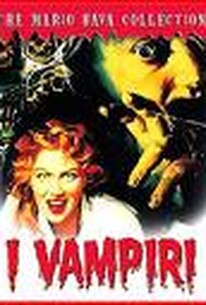 I Vampiri (The Devil's Commandment) (Lust of the Vampire) Photos

This Italian vampire tale stars Gianna Maria Canale as an ancient, sultry bloodsucker who, much like real-life kinswoman Countess Bathory, can only maintain her youthful appearance through the regular consumption of a serum derived from virgins' blood. When she begins to age again, she demands better results from the serum's inventor, who proceeds to capture more young maidens... but her plan is undone by the meddling of an intrepid reporter. Originally titled I Vampiri (The Vampires), this science-fiction-flavored variation on the Vampire Gothic kicked Italy's horror film machine into high gear, helped greatly by the cinematography of noted horror filmmaker Mario Bava -- who shared some directorial duties with Riccardo Freda and designed some of the special effects. ~ Cavett Binion, Rovi

A pretty fine little movie it is, with drop-dead gorgeous black and white CinemaScope photography.

I Vampiri (The Devil's Commandment) (Lust of the Vampire) Quotes