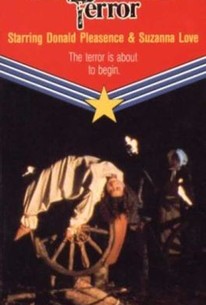 Ulli Lommel's atmospheric chiller opens with a violent prologue in the 17th-century Colonial town of Devonsville, where a trio of local women are accused of witchcraft by the zealous locals and executed in gory fashion by pitchfork-wielding vigilantes. Flash forward to the present, where the arrival of three progressive young women ignites the same superstitious paranoia among the current generation of townsfolk -- who perceive their new visitors' arrival as the culmination of an ages-old curse. The pretty new schoolteacher (Suzanna Love), plagued by ominous visions, consults the local psychiatrist (Donald Pleasence), whose hypnotic regression therapy reveals the true nature of her ancestry -- which finally surfaces when a new group of vigilantes begins the inevitable witch-hunt. Moody and well-photographed (Lommel once studied under legendary German auteur (Rainier Werner Fassbinder), this film tends to cloud its basically feminist theme with some rather exploitative gross-out effects -- particularly the depiction of Pleasence's ancestral curse, which has him constantly digging tiny worms from various parts of his body.

Paul Bentzen
as Executioner
View All

Critic Reviews for The Devonsville Terror

There are no critic reviews yet for The Devonsville Terror. Keep checking Rotten Tomatoes for updates!

Audience Reviews for The Devonsville Terror

There are no featured audience reviews yet. Click the link below to see what others say about The Devonsville Terror!