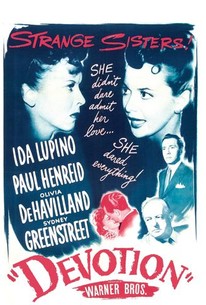 Roundly blasted upon its release because of the extreme liberties it takes with the truth, Devotion is better as cinema than as history. Not that it's great cinema, mind you, mainly because the filmmakers opted to replace historical fact with either tired dramatic clichés or wild improbabilities. As an example of the latter, the film posits that Paul Henreid's character, who is a standard-issue film romantic hero (troubled, but understandably so), is the inspiration for two of the most passionate, fiery characters in the canon of English literature. Arthur Kennedy as brother Bramwell is much more passionate and fiery, a fact which tends to further muddle things up. The generic setting is also disappointing; these ladies wrote as they wrote because of where they lived and how they lived, but little of this makes it to the screen. Fortunately, Devotion has Olivia de Havilland and Ida Lupino on hand. De Havilland is quite good, grabbing hold of whatever she can find in the script and milking it for all it's worth. Lupino does even better, often making this standard-issue (at best) writing seem engaging and moving. As indicated, Kennedy also makes things work for him, and Nancy Coleman does what she can with the little she is handed. Erich Wolfgang Korngold's score provides plenty of the atmosphere that Curtis Bernhardt's direction often lacks. Ultimately, Devotion's assets, particularly Lupino and de Havilland, manage to squeeze it into the winner's column -- but it's a pretty close call. The film was produced in 1943, hence the presence of Montagu Love, who died that year.

Dame May Whitty
as Lady Thornton

Brandon Hurst
as Duke of Wellington

Makes no effort to apologize for being historically inaccurate.

There are no featured audience reviews yet. Click the link below to see what others say about Devotion!