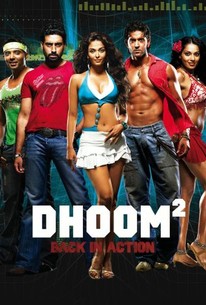 Hrithik Roshan, Aishwarya Rai, and Abhishek Bachchan star in the action-packed sequel to director Sanjay Gadhvi's hi-tech 2004 hit concerning a malicious gang of Bombay bikers who terrorize the city and leave the citizens shaken with fear. Stalwart good guy Roshan shakes things up by eschewing his do-gooder persona to tackle the role of a ruthless villain, with Bride and Prejudice star Rai assumes the role of his cunning girlfriend. With 1,200 prints of the film released into theaters worldwide in November 2006, Dhoom 2 would ultimately earn the privilege of becoming the largest-scale release in Bollywood history to date.

Hrithik Roshan
as Aryan / Mr. A

Simon Laroque
as Nick
View All

Healthy diet is a must. But sometimes you can't help craving for junk food. Dhoom 2 is like masala street grub, tangy and savoury.

Perhaps Gadhvi decided that style and glamour are enough to render narrative inconsequential. The actors pout and preen but are bleached into the background by Roshan's high-beam star power.

The pleasure principle is palpable in the giddy, slick Dhoom 2, a satisfying example of the new, thoroughly modern Bollywood.

For me, Dhoom 2 lies at the intersection of being the most exciting, creative, and charismatic Bollywood film of the 2000s.

This is cops and robbers for grown ups.

A vacuous but entertaining genre-hopper.

The lip-gloss camerawork, the editing chops, the imaginative sets, the branded costumes and the picture postcard locations are boss.

With all the beautiful people dancing up a storm to catchy beats, making big things go boom, and looking effortlessly cool while doing it all, this is pure popcorn escapist entertainment of the most guiltily irresistible order.

Dhoom 2 makes no lasting contributions to world cinema, but if two-and-a-half hours of disposable entertainment are all you're after, you could do far worse.

For movies like this flixster should introduce a system with negative ratings.

An interesting follow-up that centralizes on Jai and Ali (whose now a cop). The two are helping fellow cop, Shonali Bose, to catch the infamous thief, Mr. A. With the help of Sunehri, they follow Mr. A to Rio de Janeiro in hopes that they would catch him in the act. Little do Jai and Ali know, Sunehri and Aryan (renown Mr. A) fall in love and she is caught between choosing an old way of life or staying out of jail. Great cast- Hrithik Roshan, Aishwarya Rai, Abhishek Bachchan, Uday Chopra, Bipasha Basu, and Rimi Sen. Worthy!

See I have problems with new Indian Movies. I rather stuck on the old ones between Black and whites till mid 90`s "Bollywood" stuff. I took a tiny bit look on this one and thought christ this is a Copy.