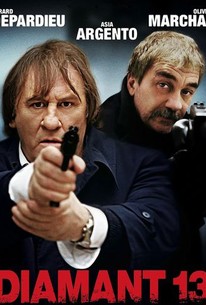 Gerard Depardieu, Oliver Marchal, and Asia Argento star in this thriller about a Paris police officer who puts his own career on the line to help his lifelong friend, a crooked narcotics cop who does some drug trafficking on the side. Mat works the night beat in the city, and his best friend Franck works in the drug squad. But after busting the local drug dealers, Franck turns a tidy profit by selling their product at cut-rate prices. When Franck gets in over his head, it's up to Mat to help and old friend by taking matters into his own hands.

Pascal Roblin
as Motorcyclist
View All

There are no critic reviews yet for Diamant 13. Keep checking Rotten Tomatoes for updates!

There are no featured reviews for Diamant 13 at this time.