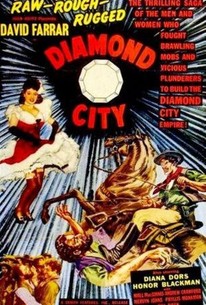 Diamond City is a British "western", set not in Australia as was often the case but in the wilds of South Africa. David Farrar is a lawkeeper sworn to lawkeep in the diamond mines. The poachers thereabouts try their luck at circumventing Farrar, but he's too fast for them. The final shootout isn't quite the Gunfight at the OK Corral, but it will serve until English history offers a real counterpart to that famous western battle. David Farrar's leading lady in Diamond City is future Avengers star Honor Blackman, who in 1949 was still in her blushing-heroine phase. ~ Hal Erickson, Rovi

Ernest Butcher
as Tom the Carpenter
View All

Saloon-bar brawls and Salvation Army meetings combine to make a lot of noise.

There are no featured reviews for Diamond City at this time.