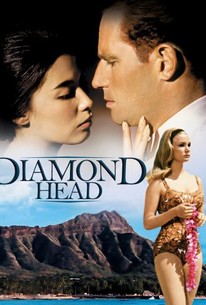 There's trouble in the island paradise of Hawaii when pineapple plantation tycoon Richard Howland (Charlton Heston) objects to his sister's intentions to marry a full-blooded native. Sloan (Yvette Mimieux) incurs her brother's wrath when she pledges her love to Native Hawaiian Paul Kahana (James Darren). Richard fears the racially mixed marriage will stop any chances he has of becoming a senator. When Richard accidently kills Paul, Sloan takes comfort in the arms of Paul's half-brother Dr. Dean Kahana (George Chakiris). The bigoted Richard's idyllic bubble is burst once again when his Chinese mistress becomes pregnant in this drama of social injustice and intolerance

Elizabeth Allen (I)
as Laura Beckett

There are no critic reviews yet for Diamond Head. Keep checking Rotten Tomatoes for updates!

Charlton Heston plays a pineapple land baron in this movie who owns one of the smaller Islands of Hawaii and nothing happens without his approval including his sister marring a local raised Hawaiian which is strictly taboo and unheard off. Modern day reviewers try to make this all about racism White vs Hawaiian and nothing could be further from the truth. Charlton Heston little sister ends up getting killed by the hands of Heston but strictly an accident. If you were ever in Hawaii and lived there you know the only racism is the native Hawaiians' don't accept the whites from mainland USA. But still in my book this film is 5 stars 10-2-12