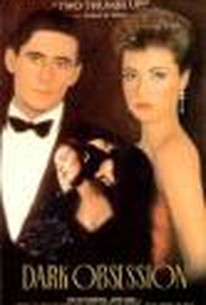 Dark Obsession is a slow, English-made, psychological thriller dealing with erotic obsession, guilt and betrayal. Sir Hugo Buckton (Gabriel Byrne), an aristocrat strapped for money, is married to beautiful, sensual and successful Virginia (Amanda Donohoe). His alcoholism and his envy of her lead to his obsessive jealousy and belief in her lack of fidelity. During one drunken evening while out driving with friends, Hugo hits and kills a pedestrian who resembles Virginia. When Hugo begins to receive vague blackmail letters, he suspects one of his friends, and the group begins to plot a murder. Dark Obsession has all the ingredients of a first-rate thriller but fails despite its excellent cast to generate any excitement. The pace of the film is languid, the motivations of the characters are unclear, and after the accidental death, nothing much really happens. Dark Obsession, originally released as Diamond Skulls, despite the best efforts of its cast, is a thriller that fails to thrill. ~ Linda Rasmussen, Rovi

Edward Burnham
as John the Gardener

A stylish melodrama about sex and violence among the British aristocracy, Diamond Skulls never quite delivers the punches it promises.

The controlled technique echoes the theme of domination, but combined with the largely unsympathetic characters, results in a film that affects emotion and remains curiously hollow.

Rarely does a documentary film maker make the transition to fiction as adroitly as Nicholas Broomfield has in "Dark Obsession," a psychological thriller displaying a documentarian's fascination for small, telling details.

[Broomfield] wants to show us how the very fabric of the lives of these aristocrats has undercut their human perspective, has convinced them they are above and beyond the law.

Intended as a psycho-thriller, Broomfield's film is in fact a skimpily plotted rumination on what's rank among the privileged.

[It] attempts to make a serious social statement within the context of a mainstream entertainment. But the mix never gels, and it succeeds as neither.

Dark Obsession is visually alluring to look at and rife with potential but director Broomfield never seems to bring it to any dramatic boiling point. Like many an obsession, it's all dressed up with nowhere to go.

There are no featured reviews for Diamond Skulls (Dark Obsession) at this time.