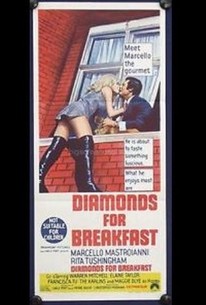 Marcello Mastroianni marks his English language film debut in this featherweight caper film directed by first-time director Christopher Morahan. Mastroianni plays the owner of a London boutique who also happens to be the fourth in line to succeed the Russian throne. Mastroianni, feeling that the collection of Russian imperial jewels actually belongs to him, determines to steal them and return them to their rightful owner -- himself. To carry out his plan, he puts together a cadre of pulchritudinous female crooks and arranges for his gal gang to model the imperial jewels at a fashion show. But, as usual, complications set in to mess up his plans. ~ Paul Brenner, Rovi

David Horne
as Duke of Windemere

Critic Reviews for Diamonds for Breakfast

There are no critic reviews yet for Diamonds for Breakfast. Keep checking Rotten Tomatoes for updates!

There are no featured reviews for Diamonds for Breakfast at this time.