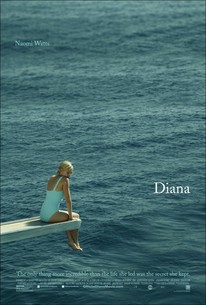 Critics Consensus: Naomi Watts tries hard in the title role, but Diana buries her efforts under a shoddy script and clumsy direction.

Critics Consensus: Naomi Watts tries hard in the title role, but Diana buries her efforts under a shoddy script and clumsy direction.

Critic Consensus: Naomi Watts tries hard in the title role, but Diana buries her efforts under a shoddy script and clumsy direction.

Will Chitty
as Security Guard

Max Wrottesley
as Ian
View All

Too much of this movie feels made specifically for the movie, which goes directly against its alleged realism, and leaves the audience confused about the point of it all.

Are the micro-biopics that don't even bother to provide overviews of their famed subjects' entire lives, but instead lean on the spectacle of celebrity impersonation, the new camp?

Diana might have been flawed and scheming and love-starved, but this film doesn't help explain that. Nor does it illuminate the common touch and humanitarian side that endeared her to a global audience.

Not a lot different from whatever movie Katherine Heigl has made lately.

The film can't find the woman beneath the façade, despite Watts' best efforts. Maybe she didn't exist. Or maybe there's a better movie to be made.

Diana turns out to be an enormously tedious character study which never once has the balls to go beyond its glossed-up TV movie roots.

A film that plays like a National Enquirer exposé with better pictures.

I just wished the film was brave in its execution. It played it very safe...and it showed.

One can't help but think while watching Diana, maybe if we'd had a PG-13 film version of her banal romance with the heart surgeon while it was transpiring, the masses would have let them have their privacy since there's nothing to see.

Diana is a yawner, and the Princess' memory deserves much, much better than this. There's a big responsibility that comes along with portraying a recently deceased, widely beloved person on-screen, a responsibility to dig at the truth.

Putting aside its atrocious script, soppy romanticism and miasma of misjudged performances, it's difficult to decipher who exactly Diana is being targeted towards.

Naomi Watts does a good job as Diana, even in the way she walks and looks, but there is not much that she can do to save a soapy script (full of horribly corny lines) that has no real insight into her character and only shows her as immature, caricatural and not very bright.

The only thing more incredible than the life she led was the secret she kept. Very well made Film! The Film does not portray Diana in a bad way at all. If anything, it reiterates the absolute disgusting habits our press have had in terms of absolute disregard and disrespect for people's privacy. You feel a certain connection with Diana throughout the film, and see her for the "normal person" she was deep down. Naomi Watts' performance was spectacular, and she certainly did Diana justice. Although the film is most certainly disliked by many - i.e: the media, Islamophobes and daily mail readers... It is disliked for the mere fact that the film provides an insight into things that make certain people very uncomfortable, such as the prospect of the Princess of Wales marrying to a Pakistani Muslim, and the fact that Diana was actually a human being, with feelings, and with a difficult life. During the last two years of her life, Princess Diana embarks on a final rite of passage: a secret love affair with Pakistani heart surgeon Hasnat Khan.

Mediocre drama based on the last two years of Diana Princess of Wales life. The film boasts some very good performances, unfortunately, I felt that the story was underwhelming and it didn't go in depth with her last years. The tone of the film feels preachy and tries to be something great, but the result is a film that is heavily flawed, and never reaches its potential. The subject is good, but the execution is poor. I think it's a shame because Naomi Watts was perfect for the role. However the film's script leaves a lot to be desired. Is the film as bad as everyone says? No, but it still leaves room for improvement. The aspect about the film is that it really could have been an outstanding drama, considering its subject. The film's script suffers due to a lack of underwhelming ideas, and in the end, the film just doesn't deliver. I really wanted to enjoy this film, but there's nothing of note here. Watts is a perfect choice as Diana, and if the film's script would have been better fleshed out, then maybe this would have been a much better film than what it turned out to be. Don't expect anything great with this film, as it leaves you wanting more out of the film. Considering its story, I think there could have been a much better take on Diana last few years. Unfortunately this film is mediocre at best, and is not really worth seeing if you want a vivid drama to watch. I think it's a shame because Naomi Watts really did give a good performance, unfortunately the lacking material that she has to work with just doesn't offer anything to save this film from being a letdown. Given a few rewrites, I think that this film really could have been something memorable. Instead it wastes a good cast on a poorly thought out storyline that just seems to overdo most of the time. With that being said, the definitive biopic of Diana, Princess of Wales has yet to be made.

"After an unexpected hiatus (holiday season, good friend moving to LA) it was about time I got back into writing reviews. An idea one of my friends also had as she (for some reason) checks my profile for my thoughts on films. Noticing I didn't post anything for two weeks she decided to shoot me with her ray gun, take me to her spaceship, insert a bomb into my genitals, and set a timer for three hours. Telling me the only way to survive is to watch "Diana" and write a review in my limited time. Thus I did it and barely made it out alive. However, she refused to remove the bomb!". Excerpt from the biography "Based on a true story". Diana follows the last two years of Princess Diana life secret love affair with Pakistani heart surgeon Hasnat Khan turning a life story into a very crummy romance film. Calling this film a biopic is the equivalent of saying the film "2012" is base on a true story. Problem number one with this film making the person of interest boring. As someone who knows nothing about the Princess of Wales this film shares no insight about her nor the people around her. Its reluctant to share anything even the most basic of understanding of who Diana is a person becomes lost to its audience. Now because of the structure of the film manipulative narrative Diana comes across as a one dimensional Gollum. Now going by written dialogue in the film Diana "Gets very excited by Hospitals", "I'm a princess and I get what I want", and wonders if "Did they publish the pictures of the kids with all their arms and legs blown off". That's some awful dialogue yes, but the rest of the writing is equally appalling. Not to forget exploitative beginning the film starting on the night of her death hammering the message that there is no return. Earlier I said this is more of a crummy romance and I stand by that. For example, the film paints Diana was so swept off her feet that she ignored her children and her work. Doing charity work for the sake of good lips service. In any other fictional film if you have bad characters, underdeveloped elements, and sloppy narrative you simply get a bad piece of fiction. Not here as even if the events in the film did happen it feels false. In a movie that has the Dwayne Johnson Quartet (sadly Dwayne Johnson is nowhere in the film) you end up quitting finding any shred of truth that the film might share. Even its main focus on the romance is terribly written. Important events are glossed over, the romance is egotistical (ones a whiner and ones comes across as too clingy), and at no point allows us to see Diana the way the filmmaker intended us to see her. There's a line in the film that goes "You don't perform the operation, the operation performs you. And when it's over, reality is a bit flat. You're very tire.". That statement holds true to the film itself. You don't experience the film, the film attempts destroy you and your perception of Diana in reality. Hoping in the end you're too tired to search for the truth and accepts the false reality the film gives you. Naomi Watts has little material to work from, the result being overuse of only a few mannerisms and speech characteristics. She delivers some awful, awful lines with a straight face. If anything the acting is best the thing about the film. All the performances are average, but at no point do they attempt to ham it up or go over the top with their performances. As for everything else it's unnoticeable. The direction is on autopilot with no interesting shots being stuck in limbo and the film score is forgettable to the point the closing credits remind there was actually music in the film. Also, playing Beethoven 9th Symphony during heart surgery is not romantic. Diana is a terrible romance film that I refuse to consider biopic. A biopic should tell us, show us, or give insight on the person of interest gaining some level of understanding that person in a new way something this film does not do. Instead "Diana" chooses to do the opposite capitalizing on someone death exploiting people's feeling for the sake of cash. If that wasn't the intention of the people involved in making this were it's the feeling they get across.