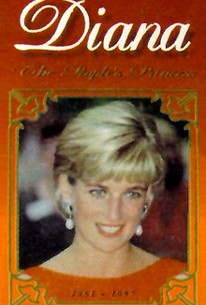 Not to be confused with the 50-minute television documentary of the same name, the made-for-British-TV biopic Diana: The People's Princess stars Amy Seccombe as the title character. Rather than rehash the tumultuous marriage between Diana and Prince Charles (Robert De Newby), the film focuses on the protagonist's last 14 months on Earth, from her divorce in May of 1996 to her tragic death in August of 1997. Adroitly blending heartbreak with triumph, the script details Diana's loss of her royal title, her troubled relationship with sons Harry (Rory Jennings) and William (Freddie Sayers), her ongoing travails with the press and papparazzi, her extensive humanitarian activities (with Nelson Mandela and Mother Theresa making token appearances), and her romance with Dodi Ay Fayed (George Jackos), who was fated to die with Diana in that infamous car crash. Seemingly dedicated to bestowing sainthood upon Princess Di, the film manages to make her antagonists as unpleasant and unsympathetic as possible, with an inordinate amount of scorn heaped upon Dodi's former fiancée! First telecast in the U.K. on April 12, 1998, Diana: The People's Princess debuted in the U.S. courtesy of the TNT cable network on August 29, 1999, on the eve of the second anniversary of Diana's death.

Christopher Toyne
as Newscaster
View All

There are no critic reviews yet for Diana: The People's Princess. Keep checking Rotten Tomatoes for updates!

There are no featured reviews for Diana: The People's Princess at this time.