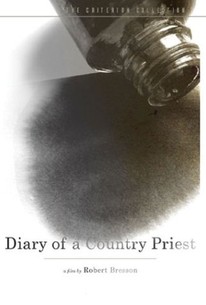 Critics Consensus: Diary of a Country Priest brilliantly captures one man's spiritual and religious journey -- and the striking next phase in the evolution of a major filmmaking talent.

Critics Consensus: Diary of a Country Priest brilliantly captures one man's spiritual and religious journey -- and the striking next phase in the evolution of a major filmmaking talent.

Critic Consensus: Diary of a Country Priest brilliantly captures one man's spiritual and religious journey -- and the striking next phase in the evolution of a major filmmaking talent.

An austere look at the experiences of a young priest in a small French parish, Robert Bresson's masterly Le Journal d'un curé de campagne (Diary of a Country Priest) presents a powerful, complex exploration of faith underneath a deceptively simple exterior. Drawn from a novel by Georges Bernanos, the film centers on the priest of Ambricourt (Claude Laydu), a withdrawn, devout young man whose social awkwardness leaves him isolated from the community he is meant to serve. Further problems derive from the priest's ill health, which limits him to a diet of bread and wine and hinders his ability to perform his duties. Growing sicker and increasingly uncertain about his purpose in life, the priest undergoes a crisis of faith that threatens to drive him away from his village and from God. Bresson presents his spiritual tale in a minimalist, unadorned style, relying on a rigorous series of stripped-down shots and utilizing non-actors in many of the supporting roles. The approach may initially seem distancing or ponderous to a contemporary audience, but the cumulative impact of the brilliant visuals and Laydu's powerful, restrained performance is unquestionable. Almost universally acclaimed, this searching drama is generally considered one of Bresson's finest works and a crucial classic of world cinema. ~ Judd Blaise, Rovi

André Guibert
as The Priest of Torcy

Jean Riveyre
as The Count

The chance to see Robert Bresson's Diary of a Country Priest... should not be passed up; it is an enterprise of great pith and moment in the history of cinema.

A film like Diary of a Country Priest gathers its strength as it continues. There's always the sense that Bresson knows exactly where he's going and the simplest way to get there.

A film that words fail.

The word 'sublime' has often been used to describe this Robert Bresson masterpiece, a slow-paced film of great purity that portrays the pain and occasional joy of the religious life.

Bresson sees spiritual disorder as a disease, not unlike the stomach cancer we suspect is-and is ultimately confirmed to be-plaguing our titular character.

Manages to marry human concerns with cosmic questions without making a big deal about either, and without giving either short shrift.

What is unique about Bresson's film is that the images could go without - I think they should - the words that are used to describe these images. [Full Review in Spanish]

A seemingly literary exercise, but one that slowly and memorably imprints itself sensorially by the final reel.

This sublime picture is directed by Robert Bresson, who painstakingly crafts his signature visuals -- stark, forceful and rigorous in their attention to detail -- to bring a striking luminosity to the bleak events.

Diary is less a movie about the necessity of faith than what it means to be cut down in the midst of youthful idealism and intransigence, before life offers wisdom.

I was extremely dissapointed. The biggest problem was the voice over. I mean I'd she motions for you to sit, you don't have to tell me I can see it. I can when you're having a meal, it felt like an audio book. While yes it was entertaining and fairly sad that voice over just ruined the whole thing for me

I know "Diary of a Country Priest" is a universally renowned classic but, sorry, I really did not enjoy this much. I can't relate to wallowing in this sort of miserable piety, and the lead actor has the same dazed, wounded expression on his face throughout the entire film. I have a pet peeve about overuse of narration which this movie certainly violated, and the shapeless, orchestral smears of the score seem quite maudlin and old-fashioned today. I can easily imagine someone else raving about how delicate and lovely Bresson's directing touch is, but I was counting the minutes until the finish. If I crave an old film about a troubled priest, I'll reach for "Nazarin" or "Winter Light" instead.

I was extremely underwhelmed. SOOOO much unnecessary voice over, it really felt like Bresson didn't know how to make a film visually so he just patched things up with talking. Memo to you Robert it's a VISUAL medium. Check out Winter Light instead, it's more or less the same movie except made by a true master of the art form.

Plot: Journal d'un cure de Campagne is about a young priest who, whilst suffering from an illness, is assigned to a new parish in a French country village. The story is told by the priests recounting of his experiences in his diary.