Diary of a Mad Black Woman2005 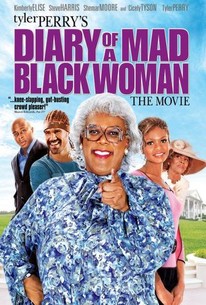 A woman has to learn how to love and trust men all over again in this comedy drama. Helen McCarter (Kimberly Elise) would seem to have it all -- she's been married for 18 years to Charles (Steve Harris), and over the course of their time together, he's become one of Atlanta's most successful attorneys. But despite wealth and prestige, things are not as they should be at the McCarter home, and on their anniversary, Charles drops a bombshell on Helen -- he's divorcing her for another woman. Escorted out of the house with nowhere to go, Helen moves in with her grandmother Madea (Tyler Perry), a sassy woman with no shortage of opinions and a gun that she's not afraid to use. As Madea helps Helen get back on her feet emotionally, the divorcée makes the acquaintance of Orlando (Shemar Moore), a handsome man who is obviously attracted to her. But after her experiences with Charles, Helen isn't sure if she's ready to trust a man again. Diary of a Mad Black Woman was adapted from the popular stage play by Tyler Perry, who also plays several roles in the film, most prominently Madea; it marked the first feature-film credit for successful music video director Darren R. Grant. ~ Mark Deming, Rovi

News & Interviews for Diary of a Mad Black Woman

View All Diary of a Mad Black Woman News

Critic Reviews for Diary of a Mad Black Woman

Syrupy drama -- not much here for kids.

It's never less than watchable, a bizarre hybrid that somehow works as a whole, even though its various components don't mesh.

It's a cheap melodrama that presses all the right sentimental buttons.

Diary of a Mad Black Woman is a shambling affair.

The audience is whooping and hollering, basically having the gayest old time imaginable, and you sit there in utter disbelief, horrified anyone of even remotely sound mind is enjoying themselves.

Perry doesn't have any delusions of artistry, and potentially, at least, that's refreshing. But any points he earns for lack of pretense are immediately gobbled up by his lack of subtlety.

The film is blessed with the presence of Cicely Tyson, who apparently was desperately for one last cinematic fling.

It is a film full of jagged edges, but one that is sincere and beguiling at its core.

[Jams] together not two but three separate genres that probably should have remained that way.

What ruins this revenge flick is Madea's boorish, bull in the china store act reminiscent of the sassy black woman stereotype popularized by Sanford and Son's Aunt Esther. Loud and ignorant, Medea tends to trivialize every scene.

A satisfying end, but it takes a lot of work -- and a lot of suspended disbelief -- to get there.

Audience Reviews for Diary of a Mad Black Woman

Diary of a Mad Black Woman is hilarious, but why can't he make a whole movie on Madea instead of these dramas. The plot is the same old Tyler Perry dramatic black woman movie, a woman has marital problems and gets herself a new man, and side clips of the always hilarious Madea. The cast was okay, I love Tyler Perry as Madea and Joe, and the rest of the cast plays average roles. This movie has some well done moments and hilarious moments, but its the same old Tyler Perry film, and it was his first one ever, so there was more to come, but I seriously hate the dramtic portion of these films, I just wish he would make a full comedy on Madea.

Diary of a Mad Black Woman Is about A couple who been married for 18 years and then Charles drop a some really bad news on Helen. He is divorcing her so he could marry another women. At first the mother in law does everything in her power to get back at Charles. Helen could trust any other man. Will Helen trust men again or will she be alone for her rest of her life. Pros Good acting and plot. Some funny parts. cons i did not like the mother in law only worth a rent

fat black-woman suit was not your idea Mr. Perry. GOD EDDIE MURPHY WHAT THE HELL ARE YOU WAITING FOR? SUE HIM!!!