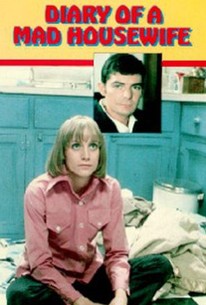 Diary of a Mad Housewife Photos

Tina Balser (Carrie Snodgrass) is the New York City housewife being driven crazy by her arrogant attorney husband Jonathan (Richard Benjamin) and their two spoiled daughters Sylvie (Lorraine Cullen) and Liz (Frannie Michel). Jonathan relentlessly pursues financial success, causing Tina to have an illicit affair with George (Frank Langella), a self centered jerk like her husband who only has affairs with married women to avoid commitment. She dumps both men and enters group therapy, but she fails to find emotional peace in that setting as well. The Alice Cooper Band, the original glam rockers, appear in this film. Carrie Snodgrass received an Academy Award nomination for her performance in the film that targeted the sympathies of distraught distaffs.

Alice Cooper
as Himself

Beverly Ballard
as (uncredited)
View All

Critic Reviews for Diary of a Mad Housewife

What invariably saves [Diary of a Mad Housewife] from banality is crisp scripting, deft direction and some delectable personality performances.

An engrossing story of the disintegration of a modern loveless marriage.

It's an entertaining satire that disappoints only in the stereotypically limited choices it offers to the woman.

Among the performers, Carrie Snodgress will surely receive the critical praise she deeply deserves.

What makes the movie work, however, is that it's played entirely from the housewife's point of view, and that the housewife is played brilliantly by Carrie Snodgress.

This is definitely not a fun watch, as the abuse Tina endures day after day is incessant. But the film is powerful, well-acted, grimly humorous, and extremely relevant...

Distinguished by its astute insights and wry dialogue.

The three leads are excellent.

Frank Perry's screen version lacks the satirical bite of the novel but benefits from the powerful performance of Carrie Snodgress who deservedly received an Oscar nomination.

Audience Reviews for Diary of a Mad Housewife

Perhaps a bit tame by today's comparison, Diary of a Mad Housewife was unique for its time period in depicting the depression felt by those stay at home moms. Kudos to Frank Langella who I haven't managed to see much in his youth.

"Diary of a Mad Housewife" is impeccably acted and characterized, though more "play-like" than I prefer. There is little action beyond small-room dialogue, and no notable directing choices beyond a couple of sharp time-lapse montages. I always heard Carrie Snodgrass's Oscar-nominated performance was amazing, but I was actually more impressed with Richard Benjamin. Without relying on any of the usual vices (physical abuse, addiction, womanizing), Benjamin's social-climbing lawyer manages to be one of the most repellent husbands you've ever seen in a film. Self-involved, needy, callous, childish, grasping, anal-retentive...he has it all. Every time he playfully suggests "a roll in dee ha-ay" to his wife, you hope she'll brain him with a baseball bat. Frank Langella is also good as a self-involved cad who (initially) seems like a refreshing escape for Snodgrass. Music fans will enjoy an unexpected live performance by Alice Cooper and band, and there's also an oh-so-brief cameo by the young Peter Boyle. Hard to guess why this film was never released on DVD.

The story of an average housewife who is married to the most annoying man in the world, you can't blame her for cheating on him! You sympathize with her. This is a fantastic drama, very psychological and intense. Plus, there's a scene with an early Alice Cooper band playing at a party! Check it out, it's cool.

Diary of a Mad Housewife Quotes