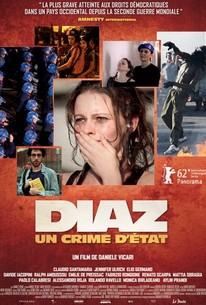 Director Daniele Vicari recreates the notorious police raid of the Diaz school in Genoa, Italy during the 2001 G8 Summit, exploring the tragic event from the perspectives of the authorities as well as the protesters and foreign journalists who took the brunt of their brutality in this politically-charged drama. It was the final day of the summit when 300 police officers searching for black bloc demonstrators raided the Diaz school. As the 90 activists lodging inside the school attempted to peacefully surrender, the police didn't arrest them but instead launched into a brutal and unrelenting attack. This film tells the story of that fateful day, and includes actual footage from the scene as a vivid reminder that letting absolute power go unchecked can yield devastating results.

Critic Reviews for Diaz: Don't Clean Up This Blood

Puts the viewer in the middle of flailing truncheons and tumbling bodies without necessary context.

Stilted dialogue, superficial characters and a threadbare story put up a wall when audiences should be feeling sympathy.

A compelling dramatisation. If the key characterisation occasionally errs on the thin side, there impact of this piece of agit-drama is still stunning.

The film might have done better to rely on fewer characters and a more traditional structure. There was enough anarchy in the streets without adding to it in the film.

Brutal, shocking and powerful in all the right ways, Diaz: Don't Clean Up This Blood is a visceral flood, pushing the limits to get across the extreme nature of the police brutality.

There are no featured reviews for Diaz: Don't Clean Up This Blood at this time.