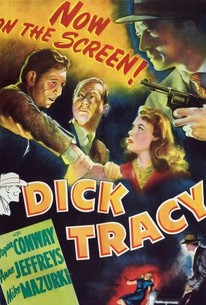 Dick Tracy, Detective (originally just Dick Tracy) was the first of four RKO Radio B-pictures based on Chester Gould's classic comic strip. Though Ralph Byrd is most closely associated with the role of Tracy, the title character is played herein by Morgan Conway (Byrd would be seen as Tracy in the last two series entries). The jut-jawed detective takes on a vicious criminal named Splitface (Mike Mazurki), who upon escaping from jail vows to murder the jurors who found him guilty and their alternates. He manages to knock off three before the police force figures out what's happening. Galvanized into action, Dick Tracy and his partner Pat Patton (Lyle Latell) track Splitface to a deserted riverboat (a leftover set from the 1945 RKO feature Man Alive) where the villain is holding Tracy's girlfriend Tess Truehart (Anne Jeffreys) and adopted son Junior (Mickey Kuhn) captive. When asked about Dick Tracy Detective in 1990, Anne Jeffreys flatly denied she'd ever played Tess Trueheart until she caught up with the film on videotape. She'd completely forgotten the whole experience.

Milton Parsons
as Deathridge the Undertaker

Franklin Farnum
as Bystander at Murder

Alphonse Martell
as Jules the Waiter

The best thing about the film is the way Berke manages to shape genuinely suspenseful film-noir elements around an otherwise simple yarn.

A classic Dick Tracy detective story, it's cool, better than that movie with Warren Beatty. Check it out.