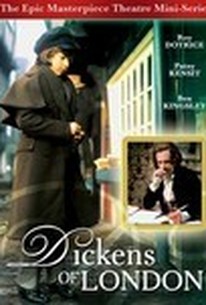 Charles Dickens' life sounds like a story that could have come from one of his novels -- his father was imprisoned when Charles was a child, forcing him to find work in a factory to support himself and his family, and it was only after many years of struggle that he began to earn his living as a reporter. In time, Dickens began writing comic short stories, and eventually he became one of the most popular and acclaimed novelists in the world. Dickens of London is a miniseries produced for British television which recounts the remarkable story of Dickens's life and career. Roy Dotrice stars as Charles Dickens, Gene Foad plays Dickens as a young man, and Simon Bell portrays Dickens as a child. ~ Mark Deming, Rovi

Critic Reviews for Dickens of London

There are no critic reviews yet for Dickens of London. Keep checking Rotten Tomatoes for updates!

There are no featured reviews for Dickens of London at this time.