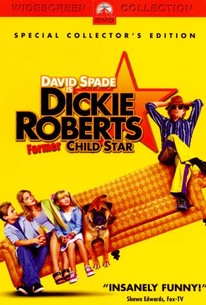 In keeping with his background in television sitcoms, Sam Weisman directs the cameo-filled comedy Dickie Roberts: Former Child Star. Dickie Roberts (David Spade) was a child actor on the hit TV show "The Glimmer Gang" and remains remembered for a particular catch phrase. Now in his thirties, he finds work as a parking valet and spends time with other nominal child stars (enter cameos by Danny Bonaduce, Corey Feldman, and the like). Wanting to make a comeback, he manages to get an audition with director Rob Reiner. When the role requires him to be normal, he decides to hire a normal family in order to relive the childhood he missed out on. He ends up with sleazy salesman George Finney (Craig Bierko) and his loving wife, Grace (Mary McCormack). Dickie shares a room with their two kids: sunny daughter Sally (Jenna Boyd) and impressionable son Sam (Scott Tessa). Former child star Alyssa Milano appears as Dickie's girlfriend, Cyndi.

Rob Reiner
as Himself

Brendan Fraser
as Himself

Willie Aames
as Himself

Tom Arnold
as Himself

Danny Bonaduce
as Himself

Fred Berry
as Himself

Todd Bridges
as Himself

Gary Coleman
as Himself

Jeff Conaway
as Himself

Dustin Diamond
as Himself

Tony Dow
as Himself

Corey Feldman
as Himself

Leif Garrett
as Himself

Corey Haim
as Himself

Florence Henderson
as Herself

Christopher Knight
as Himself

Barry Livingston
as Himself

Eddie Mekka
as Himself

Maureen McCormick
as Herself

Jay North
as Himself

Erin Moran
as Herself

Ron Palillo
as Himself

Paul Petersen
as Himself

Adam Rich
as Himself

Rodney Allen Rippy
as Himself

Marion Ross
as Herself

Barry Williams
as Himself

Charlene Tilton
as Herself

Dick Van Patten
as Himself

Brian Clark
as Guy in Car

Oliver A. Kindred
as Bully

Wyatt Smith
as Boy in Crowd

Valerie Perri
as Teacher at Microphone

Michael Buffer
as Himself

Jann Carl
as Herself

Peter Dante
as Himself

Lisa Joyner
as Herself

Jonathan Loughran
as Himself

Jeremy Miller
as Himself

Haywood Nelson
as Himself

Ernest Thomas
as Himself

Spade doesn't look to have the confidence to flourish in such a mainstream film.

Not at all funny David Spade movie.

Instead, all we get is a pithy mope session where the best the group can do is rag on current celebrities like Brad Pitt. In a scenario so ripe for comedy and pathos, this is the best Spade can come up with?

Child is father to the man in this often funny, but just as often ham-fisted, untrue Hollywood story.

You sense Spade is scared of what finding too much of himself in Dickie might mean.

This is Spade's third attempt at leading-man status, and I will admit it is his best lead role to date. But when your other two films were Joe Dirt and Lost and Found, it's not like the bar was raised very high.

Sorry to say, but it's hard to imagine too much that's worse than sitting through this uneven, contrived big screen version of People magazine's "Where Are They Now?" column.

Has nothing of value to offer other than a dizzying number of cameos by former child stars, each of whom is only momentarily amusing as a voyeuristic opportunity to compare the grown-up on screen to the kid ever emblazoned upon our mind's eye.

A toothless, predictable showbiz comedy about the trials and tribulations of ... a has-been sitcom golden child who would do anything for a comeback.

Instead of seeing Dickie Roberts: Former Child Star, you could...pierce yourself with sharp objects.

If the filmmakers had resisted the urge to make it so adorable and meaningful, this could have been a terrific comedy.

Rich Cline
Shadows on the Wall
View All Critic Reviews (121)

I turned it off 3/4 of the way through. David Spade was better back in the early 90's.

Definately unfunny. Why does it look like David Spade is wearing mascara??? This movie's plot is terrible, and, through the course of the movie, the use every cliche in the book. David Spade should stick to talking llamas.