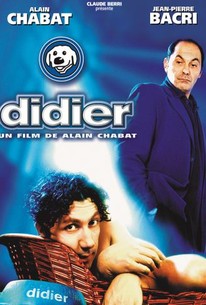 In this rollicking and earthy French comedy, a wayward moonbeam transforms a golden retriever into an ace soccer player thus saving his latest master. Technically, doggy Didier belongs to Annabelle, a scatterbrained international journalist. While she is away on assignment, she remands him to the temporary custody of her pal Costa who is not happy to have a new burden on his already high-pressure life. He is the manager of a soccer club that has been doing poorly since his star player was injured and benched. The irate club owner has sent his personal goons out to force Costa into finding a replacement before the upcoming big game. That coupled with the fact that his girlfriend has just dumped him, has put Costa in a sour mood. Now he must care for a slobbery dog? Then the moonbeam works its magic and Didier becomes a human. At first he is utterly clueless and Costa must teach him everything, but when ever-loyal Didier proves to have real talent with a soccer ball, Costa sees light at the end of the tunnel.

There are no critic reviews yet for Didier. Keep checking Rotten Tomatoes for updates!

There are no featured reviews for Didier at this time.