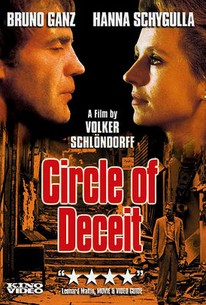 Bruno Ganz plays a West German journalist whose frequent assignments to war-torn nations have left him jaundiced. He is assigned to cover the civil war in Beirut. The combination of his harrowing experiences on the job and his after-hours relationship with widow Hannah Schygulla affects Ganz deeply, in spite of the wall he's built around himself. He suffers a crisis of conscience when he is forced to commit himself to someone--and something--for the first time in his life. The plot of Circle of Deceit was based on the reminiscences of novelist Nicolas Born; the picture's realism is grotesquely enhanced by the decision to film on location in Beirut, surrounding the actors with genuine wartime carnage--bodies and all. Originally titled Die Falschung, Circle of Deceit is not a comfortable experience, but few will stop watching once the film has started. ~ Hal Erickson, Rovi

As war movies go, Circle of Deceit is a bloody success.

A strong, compelling film, a devastating commentary on war and politics and a sensitive illumination of the personality and sensibility of the war correspondent who fancies himself as a spectator.

The humanist Circle of Deceit charts the many moral quandaries encountered by a journalist when he's sent to Beirut to catalog the outbreak of the Lebanese civil war.

Aspires to the humanist as well as the humanitarian, and ultimately achieves both.

It is a rough film to sit through, but sitting through it is definitely a worthwhile and illuminating experience.

The dramatically reconstructed battles are an example of good cinema, that is, of informative seriousness and creative imagination. [Full Review in Spanish]

This politically charged 1981 drama isn't one of Schlöndorff's greatest films, but its strong moral concerns and superb cast make it well worth viewing.

There are no featured audience reviews yet. Click the link below to see what others say about Die Fälschung (Circle of Deceit)!