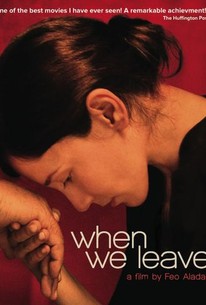 When We Leave Photos

In awarding the film Best Narrative Feature Award, and Best Actress Award for Sibel Kekilli, the Tribeca Film Festival Narrative Jury said of the film: "WHEN WE LEAVE examines one woman's struggle for personal freedom. It is a riveting and heartbreaking story of a woman trapped in an abusive relationship, who must not only free herself from that marriage, but also the cultural prejudices and judgments that would keep her there. Feo Aladag built the nuances of her film over a six year period. She rehearsed her actors for seven months. She immersed herself in every detail of a culture that is revealed to us in remarkable detail. The result is a film that balances complex social issues with honest human yearnings. Through the brutality, WHEN WE LEAVE is also a story of tenderness, the struggle for compassion, the inexorable pull of family and the need to love and be loved." German-born Umay (Sibel Kekilli) flees her oppressive marriage in Istanbul, taking her young son Cem with her. She hopes to find a better life with her family in Berlin, but her unexpected arrival creates intense conflict. Her family is trapped in their conventions, torn between their love for her and the traditional values of their community. Ultimately they decide to return Cem to his father in Turkey. To keep her son, Umay is forced to move again. She finds the inner strength to build a new life for herself and Cem, but her need for her family's love drives her to a series of ill-fated attempts at reconciliation. What Umay doesn't realize is just how deep the wounds have gone and how dangerous her struggle for self-determination has become... -- (C) Olive Films

Critic Reviews for When We Leave

"When We Leave" has a predetermined arc that almost chokes its life, but for frustrated witnesses to this passion play, Kekilli offers redemption.

A powerhouse melodrama that feels didactic and manipulative even as it rips your heart out.

The whole sad enterprise is watchable because of Kekilli.

Unfortunately, Aladag was not as nuanced in her approach as her star.

There are some intense, moving sequences, but too much emotional badgering and a general shortage of finesse.

Aside from its conclusion, "When We Leave'' is credible and well-observed.

The movie is suffocated by its own grim determinism.

...an old-fashioned melodrama with all the heightened emotions and focus on the struggles of an almost saintly heroine that you would expect from a work in that genre.

What elevates When We Leave is the three-dimensional acting and the larger context.

It's grueling, but Kekilli is fantastic.

The personal and the political are represented here. When We Leave is distinguished by strong performances, especially from Kekilli.

Audience Reviews for When We Leave

In "When We Leave," Umay(Sibel Kekilli) suffers another beating from her husband Kemal(Ufuk Bayraktar) after she was caught lying about where she spent the day. In fact, she had gotten an abortion, the first step in leaving her husband, with their son Cem(Nizam Schiller), to return to her native Germany, away from Turkey where she always felt isolated and alone. At home, her younger sister Rana(Almila Bagriacik) is getting ready for her wedding while their parents(Derya Alabora & Settar Tanriogen) are curious how long she will be staying. Yeah, about that...Umay's plan is to stay permanently, planning on working and studying, and burning her passport to make her point. In which case, a plan is made to return Cem to his father... "When We Leave" is for the most part a compelling drama on the difficult subject of honor killing, exploring it with much needed complexity, especially the hypocrisies involved. For a lot of the movie, this is accomplished through very good performances and subtlety. But the movie self-destructs with a horrible ending(maybe not for the reasons you are thinking) and a scene where the movie grandstands to horrifying effect. As an unintended side effect, Umay, who for the most part comes off as sympathetic, starts to seem a little self-centered, not realizing that her actions have repercussions for others, especially her family.

When We Leave Quotes