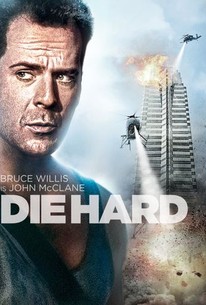 Critics Consensus: Its many imitators (and sequels) have never come close to matching the taut thrills of the definitive holiday action classic.

Critics Consensus: Its many imitators (and sequels) have never come close to matching the taut thrills of the definitive holiday action classic.

Critic Consensus: Its many imitators (and sequels) have never come close to matching the taut thrills of the definitive holiday action classic.

It's Christmas time in L.A., and there's an employee party in progress on the 30th floor of the Nakatomi Corporation building. The revelry comes to a violent end when the partygoers are taken hostage by a group of terrorists headed by Hans Gruber (Alan Rickman), who plan to steal the 600 million dollars locked in Nakatomi's high-tech safe. In truth, Gruber and his henchmen are only pretending to be politically motivated to throw the authorities off track; also in truth, Gruber has no intention of allowing anyone to get out of the building alive. Meanwhile, New York cop John McClane (Bruce Willis) has come to L.A. to visit his estranged wife, Holly (Bonnie Bedelia), who happens to be one of the hostages. Disregarding the orders of the authorities surrounding the building, McClane, who fears nothing (except heights), takes on the villains, armed with one handgun and plenty of chutzpah. Until Die Hard came along, Bruce Willis was merely that wisecracking guy on Moonlighting. After the film's profits started rolling in, Willis found himself one of the highest-paid and most sought-after leading men in Hollywood. ~ Hal Erickson, Rovi

Michele Laybourn
as Girl in Window

Bob A. Jennings
as Cameraman

Kate Finlayson
as Hostage
View All

It's a glorious scene-stealer for Alan Rickman, though it's a credit to Willis's cheeky charisma that his scene is not in fact stolen.

Die Hard is film's equivalent of a terrorist attack on your senses, but Willis' intensity and presence push it into guilty pleasure territory.

There are good performances from everyone in this long, often funny, very violent but exciting melodrama.

Willis gleefully strips down the action movie to a pretend game for children who like to fire guns and shoot bad guys. Machismo may never be the same.

Die Hard is an action picture with a capital A. In fact, you might as well go ahead and capitalize the whole darn word.

I really appreciated the interpersonal relationship between him and his wife. It wasn't slow but it was taking its time.

[It] may be the best action movie EVER.

It's another anti-cheer holiday selection, but one that keeps on giving - rewatchable sans saturation...

Sometimes-more often than not, even- a script with many hands on it becomes a case of too many cooks. With Die Hard, competing experienced creatives produced a film that works on multiple levels.

Still the prototype of the modern action yarn -- its status was secured so rapidly that subsequent action romps were invariably described as "Die Hard on a train / plane / bus / zeppelin / tricycle / what-have-you."

Die Hard is not only an excellent action film, it is an excellent film overall and its ability to stand the test of time and still hold up is admirable.

An exhilarating all-time classic action movie that is not only impressively well directed and tense when it needs to be but also always surprises us with its well-written script and realistic characterization of its witty, flesh-and-bone hero, John McClane.

Remains a stone-cold action classic even by modern movie standards. The premise is widely inventive, the action is always tense, the comedy is on-point, and the cast is top-notch all around. The highlights are by far the charismatic Bruce Willis and "always awesome in everything" Alan Rickman, who have a fantastic hero-villain dynamic that the franchise would never quite capture again. The definitive "Christmas" movie for action fans everywhere.

Still one of the, if not the, best action film of all times. A great hero, a unique location, an excellent bad guy and plenty of kick-ass action. Doesn't get much better than this. Merry Chrismas!