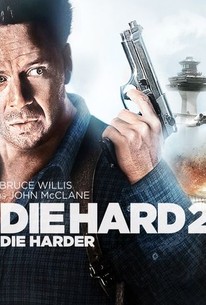 Critics Consensus: It lacks the fresh thrills of its predecessor, but Die Hard 2 still works as an over-the-top -- and reasonably taut -- big-budget sequel, with plenty of set pieces to paper over the plot deficiencies.

Critics Consensus: It lacks the fresh thrills of its predecessor, but Die Hard 2 still works as an over-the-top -- and reasonably taut -- big-budget sequel, with plenty of set pieces to paper over the plot deficiencies.

Critic Consensus: It lacks the fresh thrills of its predecessor, but Die Hard 2 still works as an over-the-top -- and reasonably taut -- big-budget sequel, with plenty of set pieces to paper over the plot deficiencies.

"Another basement, another elevator...how can the same thing happen to the same guy twice?" asks John McClane (Bruce Willis), in what is doubtless the key question of this film. A year after foiling the terrorist takeover of a high-rise office building in the first movie, McClane is waiting to pick up his wife, Holly (Bonnie Bedelia), at Dulles International Airport just outside Washington, D.C., on Christmas Eve. Scheduled to arrive the same evening is Ramon Esperanza (Franco Nero), a South American political figure who is being brought to the United States to stand trial for his role in a drug-smuggling ring. However, a group of terrorists, led by renegade American military officer Col. Stuart (William Sadler), take control of the airport, scuttling radio transmissions and placing their own men in the control tower. Stuart and his men ensure that Esperanza's plane lands safely, and then demand that Stuart and his men be given a fully-fueled 747 and free passage wherever they choose to go. Otherwise, they will guide the many circling jets waiting for landing instructions into definite crash landings, killing the many passengers on board. Not willing to stand aside as terrorists once again threaten his wife's life, the wise-cracking McClane once again leaps into action to foil Stuart's plans and bring the passenger jets safely to the ground. William Atherton, John Amos, Dennis Franz, and John Leguizamo highlight the supporting cast. ~ Mark Deming, Rovi

The filmmakers know the audience is challenging them to top themselves, and they've risen to the bait. Harlin and company build suspense the old-fashioned way. They earn it.

This is the most cheerfully preposterous film of a jaw-dropping summer, which is not to say it's not fun, it's simply orchestrated Looney Tunes.

The summer's best sequel and most satisfying blockbuster has finally arrived. Die Hard 2 is a blast.

Even when the script wanders into cynical overkill, Harlin makes sure the violence has some impact, some moral consequence, by sketching in characters for a few representative victims.

The filmmakers seem to be operating under the assumption that the way you top a successful movie is by making one that's louder, cruder and more violent.

The screenplay is precariously supported by the chips on John McClane's shoulders. Fortunately, it is also designed to Willis' unique specs.

In a summer of wildly violent action films, 'Die Hard 2' stands out. It is the best action movie since 'Lethal Weapon II,' as vastly entertaining, exciting and improbable.

Even in the action genre, there is such a thing as overkill. Die Hard 2: Die Harder pleads guilty to the charge but has enough redeeming plot twists to compensate for the excess.

Though it has an inventive and unexpected plot twist, Die Hard 2 lacks credibility. "Die Hard" was that rare modern action picture with a wholly believable plot.

One might think a movie with a reported budget of $62 million would have had a few bucks to spend on a gaffe spotter.

As vapid as it is violent.

The plot is pretty dumb and lacks the freshness of the first one, but the action is still great and Bruce Willis remains charming as the flawed John McClane.

Did not quite age as well as the films before and after it. Lacks the unique location of the original and is a bit messy in its plot. Doesn't change the fact that John McClane delivers great action, of course.

An infuriating and brainless sequel that takes an endless long time for something to finally happen and needs every single character to act as a complete idiot so that the stupid plot can move on - like Dennis Franz as an unbearable moron who is always in the way.

"Die Hard 2" is the first of 4 sequels to the amazing "Die Hard". This is pretty much the first movie, only on a plane. Terrorists have taken over an airport in an attempt to get a drug lord who is being transported there free. But, McClane happens to be at the airport because his wife is flying in. She can't land because the terrorist group have made it so planes can't see the runway, so her plane is running out of fuel, and it's a race for McClane to stop them and get Holly(his wife) down safely. This is the one I have seen the least, and when watching at the marathon, it was like a whole new movie because I forgot so much. It's very exciting and has some great action, and begins the series ascend to get crazier and crazier with their action pieces. I mean he fights on the wing of a plane that is about to fly. Insane? Yup. Entertaining? Your damn right! Great sequel and the last appearance of his wife Holly, but a great way to keep the series going.