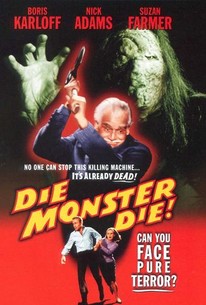 Also known as Monster of Terror, this British-made horror opus is very loosely based on H.P. Lovecraft's story "The Colour Out of Space". The story begins with an American scientist (Nick Adams) paying a visit to the remote estate of his fiancee's family (located in Lovecraft's fictional Arkham County, Massachusetts) and finding many of the surrounding flora and fauna horribly mutated by strange radiation. The source of the contamination is discovered to be a glowing meteorite kept hidden in the basement by his girlfriend's father (Boris Karloff), who has been using the radiation to mutate local plant life. As one might expect, the experiment has gotten a bit out of hand... and poor mommy has changed into something unspeakably horrible. Designed as a vehicle for Karloff (who is excellent), this is a decent freshman effort from director Daniel Haller (formerly Roger Corman's production designer), but the effectively creepy atmosphere would have been greatly assisted by a better script -- perhaps one more loyal to the source material. The same story was adapted (again, loosely) in 1987 for The Curse.

This creature feature, based on the works of H.P. Lovecraft, might have been more amazing had the makers not taken such pains to borrow from Edgar Allan Poe.

It's debatable whether the three acts of Die, Monster, Die! fit together well, but there's no doubt they collectively add up to one deliriously goofy B-movie.

Because of the presence of Boris Karloff it has its enjoyable moments.

Lovecraft Lite, from the studio that made the world safe for Edgar Allan Poe.

A very loose adaptation of Lovecraft's classic tale of alien invasion. It was cheesy but fun nonetheless.

Two great people make an attempt to produce a good movie, Die Monster Die is based on a H.P. Lovecraft Story with the great Boris Karloff, as I said an attempt, but that attempted failed. It did have moments, but far and few. Don't think this ever was high on the chart. At best the 2nd feature at a Drive-in Movie. Some how Boreis got some Radioactive rocks down in the basement, with the psyidellic colors or the 70ties. These rocks wipe out the butler, and the housemaids face which is eaten away before us, which was pretty cool, biut other then that a sleeper. Cant give this one no more then 3 stars.

If you go into this looking for H.P. Lovecraft inspired film, you may be disapointed. If you go into this looking for a fun/cheesy sci-fi/horror film, you are in for a treat! Sure the story is predictable and the special effects a bit cheesy, but there are some really great sets/locations, creepy/cheesy atmosphere and Boris Karloff! There are also a few "atmospheric" shots (mostly landscapes) in the begining of the film that are actually quite amazing!

This is one of the last movies Boris Karloff filmed before he died. Don't tell anyone, but I think it killed him.