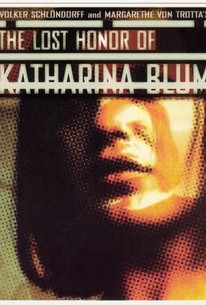 Average German citizen Katharina Blum (Angela Winkler) spends the night with a man she barely knows. The next morning, Katharina finds the man gone--and finds herself surrounded by none-too-polite police investigators. It seems that her stranger of the evening was a political activist who has long been the object of close scrutiny by the law. Her basic civil rights ignored at every turn, Katharina is relentlessly grilled about her relationship with her one-night stand. As a result, Katharina loses her job, her friends, and her standing in the community. Unsatisfied with this, the police go after Katharina's family, putting her ailing mother through an emotional wringer. After being branded a Communist by the insensitive press, Katharina goes over the top and shoots a reporter: at last, she has truly become what the media has made of her. Based on a novel by Heinrich Böll and directed with clinical near-detachment by Volker Scholendorff and Margarethe von Trotta, The Lost Honor of Katharina Blum was later remade for American TV as The Lost Honor of Katherine Beck, with Marlo Thomas in the title role.

Regine Lutz
as Else Woltersheim

Roger Corman, the director, does what he can to pump some life into the plot, but it just lies there, as dormant as Katharina's honor.

An intelligent, if finally unconvincing film.

Against the starkness of Katharina's timidity and innocence, the depictions of Beizmenne and Tötges veer into hyperbole, but it's this construction of a guileless woman in love that helps stoke audience outrage at her mistreatment.

Though their film doesn't explore the social impact of a populace unwilling to consider their sources, co-directors Volker Schlöndorff and Margarethe von Trotta do explore how easily perception can be twisted under the guise of justice and popularity ...

The material that it exposes and that I see with so much enthusiasm seems to me brief and disturbing when it constructs a very sharp thesis on media power. [Full review in Spanish]

The film rivals the realism and spontaneity of All the President's Men.

While at times too simple and rushed, this is a good movie by Volker Schlöndorff. [Full Review in Spanish]

The film's final reel is the only vital weakness in an otherwise nasty but effective exposé on the abuses by those in and with power on those without.

Katharina Blum is a fictional case within a lens of subjectivity that affords a clear contemporary resonance.

A taut thriller that is just as relevant today as when it was produced, more than thirty five years ago. A young woman spends a night with a suspected terrorist and becomes the object of a police investigation and an intense slur campaign waged by a smarmy, unscrupulous news hound and his photographer. The very beautiful Angela Winkler plays the title character and exudes a very convincing aura of naivete and bewilderment during the interrogations. We are never sure just how much she really knows, or whether she is, as she maintains, an innocent caught up in the intrigue of others. But the thrust of the movie is the way that she is portrayed in the media of the day. One could not watch without recognizing how difficult it is to recover ones good name when all of your dirty laundry (and some that was made up out of whole cloth) has been aired. Just ask Casey Anthony. The ending, while shocking, seems almost justifiable given the events as they unfolded. Jurgen Prochnow plays the terrorist, Ludwig, quietly and darkly menacing. Mario Adorf plays the lead investigator who seems a little too cozy with the reporter, played by Dieter Laser.

Brilliant! Who could have foreseen how relevant reactionary right-wing conservativism and a terrorizing media would be to contemporary American politics?