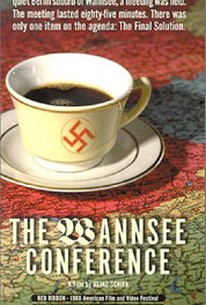 When Nazi "exterminator" Adolph Eichmann was tried for war crimes in 1961, more than one observer, taking into consideration Eichmann's "normal" veneer, commented upon "the banality of evil." Much the same can be said of the quietly chilling docudrama The Wannsee Conference. This re-creation of a January, 1942 meeting of several Nazi officials is based on the actual minutes of the conference. In calm, measured tones, the various Nazi higher-ups discuss the extermination of Europe's Jewish population. The film is shot in "real time": it runs 87 minutes, precisely the same amount of time consumed by the actual event. Don't let anyone ever tell you that a film consisting of an hour and a half of conversation is dull: The Wannsee Conference is one of the most disturbing pictures ever committed to celluloid. ~ Hal Erickson, Rovi

Dietrich Mattausch
as Reinhard Heydrich Chief of the Security Police

Harald Dieti
as Meyer Gauleiter for the Occupied Eastern T

Martin Lüttge
as Dr. Rudolf Lange Commander of the Gestapo

There are no critic reviews yet for Die Wannseekonferenz (Hitler's Final Solution: The Wannsee Conference). Keep checking Rotten Tomatoes for updates!

There are no featured audience reviews yet. Click the link below to see what others say about Die Wannseekonferenz (Hitler's Final Solution: The Wannsee Conference)!