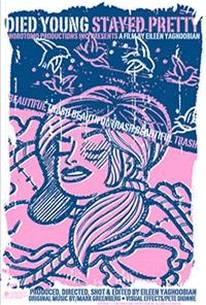 Every rock band, from the most famous stadium-level superstars to the lowly beginners hobbling from one basement gig to the next in a rusty van, needs to let their fans know when and where they'll be playing, and since the late 1960's rock posters have gone from utilitarian advertising fliers to legitimate works of art. Since punk rock changed the rules of visual style in rock music and the rise of indie rock made irony and cultural appropriation key parts of the hipster lexicon, the style of rock posters has changed and a number of graphic artists have established international reputations for their work, in which they often present their own political and sociological statements in addition to publicizing concerts. Filmmaker Eileen Yaghoobian chats with some of the leading figures on the rock poster scene and examines the ideas and attitudes behind their work in the documentary Died Young, Stayed Pretty, which features interviews with Jay Ryan, Art Chantry, Mat Daly, Keith Herzik, Jeff Kleinsmith and many more. Featuring an original musical score by Mark Greenberg, Died Young, Stayed Pretty was an official selection at the 2008 Montreal World Film Festival.

Whenever the quaint, binary idea of a scrappy counterculture vs. The Man overshadows the personalities, craft, and musical context, the movie's an Adbusters bore.

Eileen Yaghoobian's documentary presents a lot of good art and entertaining personalities in a package that's diverting on a moment-to-moment basis, but lacks any organizing principal or precise point to make the whole cohere.

Are these cultural artifacts or just more trash littering the light posts and bulletin boards of your city? That all depends on the eye of the beholder.

It soon becomes apparent that there's no real structure or point of view to it all.

The poster makers... mine the outer limits of violence and misogyny with a garish, pop art palette.

Suffer the perverse undertones and this is a fitting examination of a significant yet overlooked contemporary art form.

Eileen Yaghoobian's fabulous debut doc is an inclusive look at the renaissance of poster art in the wake of punk and the rebirth of a defiant counterculture.

This is a mildly interesting documentary that takes at face value the claims made for their art by the naive nihilists who design jagged, violent and often obscene posters for local rock groups across North America.

Died Young is an entertaining film with sharp cultural observations that even dares to examine the collective American psychoses.

It's a visually stunning film, even if the subject matter isn't hugely compelling.

What a cool, unexpected kick this film was.

There are no featured audience reviews yet. Click the link below to see what others say about Died Young, Stayed Pretty!