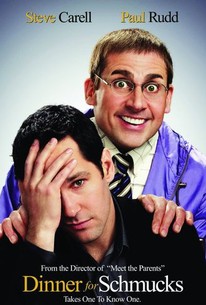 Critics Consensus: It doesn't honor its source material -- or its immensely likable leads -- as well as it should, but Dinner for Schmucks offers fitfully nourishing comedy.

Critics Consensus: It doesn't honor its source material -- or its immensely likable leads -- as well as it should, but Dinner for Schmucks offers fitfully nourishing comedy.

Critic Consensus: It doesn't honor its source material -- or its immensely likable leads -- as well as it should, but Dinner for Schmucks offers fitfully nourishing comedy.

Tim, an up-and-coming executive, has just received his first invitation to the "dinner for idiots," a monthly event hosted by his boss that promises bragging rights (and maybe more) to the exec that shows up with the biggest buffoon. Tim's fiancée, Julie, finds it distasteful and Tim agrees to skip the dinner, until he bumps into Barry - an IRS employee who devotes his spare time to building elaborate taxidermy mouse dioramas - and quickly realizes he's struck idiot gold. Tim can't resist, and invites Barry, whose blundering good intentions soon sends Tim's life into a frenzied downward spiral and a series of comic misadventures, threatening a major business deal, bringing crazy stalker ex-girlfriend, Darla, back into Tim's life and driving Julie (or so Tim thinks) into the arms of another man.

Jeff Dunham
as Lewis the Ventriloquist

Critic Reviews for Dinner for Schmucks

You know you're in trouble when the best thing in your movie is a bunch of dead rodents.

It cost around $70 million, according to the Los Angeles Times, which is about $5 million per laugh if I'm generous.

When scene after scene falls flat, and the film seems a lot longer than it actually is, you know that this is a comedy that just isn't working.

Francis Veber's 1998 Le Dîner de Cons was no great shakes, but it looks almost classy next to this atrocious remake.

The majority of comedy comes from Carell, who singlehandedly serves up a combination of slapstick, contorted facial expressions, immaturity, and introverted conversations.

One of summer 2010's most satisfying comedies.

It follows a familiar plotline with familiar twists, and while Carell and the gang valiantly try to transcend the material, even they can only go so far.

When it comes to comedy, there's a fine line between making the audience laugh and just making people uncomfortable. Unfortunately, I felt more of the later in Dinner for Schmucks.

It's clear that Dinner for Schmucks is going for a Meet the Parents-style typhoon of misery, but the series of misfortunes that befall Tim are more mean than funny and too contrived to be outrageous.

Dinner For Schmucks seems promising at first but too many plot points feel forced and the humor is too dumb to enjoy.

Matt Joseph
We Got This Covered
View All Critic Reviews (191)

Audience Reviews for Dinner for Schmucks

"Dinner For Schmucks" gives the feeling of an average over-the-top comedy, but it's the exact opposite when following through on this film. Steve Carell plays a very odd character who is always there to make a sad moment funny. While Paul Rudd is being invaded with problem after problem, the movie unravels it's soft heart, before jumping back into it's hilarious comedic style. The jokes fly minute by minute and the characters grow in every scene; However, the film takes too much time to get to the point, and I actually almost forgot about the dinner altogether by the end. Dinner for Schmucks has laughter, heart, and packs a pretty big punch in the acting category, but falls flat on originality. "Dinner for Schmucks" is a pretty funny comedy, but that's it!

Huge misfire!!! bad result in my eyes as this film really is terribly disappointing. There is hardly any funny stuff anywhere! unless you count Carell screaming like an infant at times to be funny?. Apart from a few nice lines here and there and one dinner scene with Carell, Rudd and 'Little Britain's' David Williams which is quite amusing but not hilarious that's it really. The plot is pretty thin, the characters are just dull, you just don't really care about any of them, the ending is dumb and childish and Carell's character is actually rather annoying. Another poor film from Carell who really should stick to TV, I wanted to like this I really did, had high hopes for the 'Dumb n Dumber' type script but alas it falls well short and like the recent 'Grown Ups' is a total wasted opportunity.

Despite being other buddy comedy where one is dumb and the another is a victim and doesn't looks better that the original picture, Dinner for Schmucks it's an agonizing and funny dark comedy, with a charming and very likable cast.