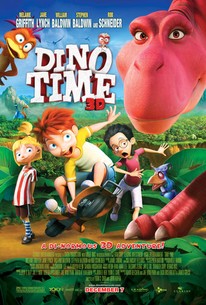 There's nothing Ernie loves more than an excellent adventure. Whether he's zooming around town on his rocket-powered skateboard or stealing an early peek at the cool new fossil exhibit at the Dinosaur Museum, Ernie never lets the strict rule of his mom, Sue (Jane Lynch) or his tag-along sister, Julia, keep him from stirring up some fun. While visiting his best friend Max's house, daredevil Ernie stumbles upon Max's dad's latest invention: a sleek, egg-shaped time machine. When Julia bursts in on the boys' discovery, the time machine whirs to life and closes its doors on the three arguing kids. It whisks them away to a lush jungle untouched by mankind, where a living, breathing T-Rex named Tyra (Melanie Griffith) mistakes them for her newly-hatched children, joining her family with hyperactive dinosaur son Dodger (Rob Schneider). (c) Official Site

Some rudimentary computer animation, a B-list voice cast and a surfeit of narrative ambition are the defining features of US-South Korean co-production Dino Time.

Displays early flickers of wit in zapping squabbling kids back to their hometown as it was in the Cretaceous era, before a drab quest narrative kicks in, cueing more plodding than any 70-minute should.

Driven by some half-decent action scenes, Dino Time is no must-see, but it will comfortably while away a wet afternoon.

There are lightly delivered lessons for both parents and progeny; it nicely balances a message about allowing your kids to plough their own path with one about appreciating maternal sacrifice.

There are no featured audience reviews yet. Click the link below to see what others say about Dino Time!