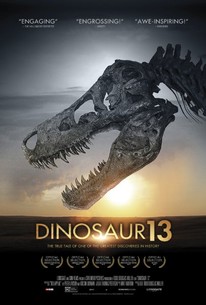 Critics Consensus: It's undeniably slanted and doesn't cover as much of the story as it should, but Dinosaur 13 makes for gripping documentary viewing, flaws and all.

Critics Consensus: It's undeniably slanted and doesn't cover as much of the story as it should, but Dinosaur 13 makes for gripping documentary viewing, flaws and all.

Critic Consensus: It's undeniably slanted and doesn't cover as much of the story as it should, but Dinosaur 13 makes for gripping documentary viewing, flaws and all.

When Paleontologist Peter Larson and his team from the Black Hills Institute of Geological Research made the world's greatest dinosaur discovery in 1990, they knew it was the find of a lifetime; the largest, most complete T. rex ever found. But during a ten-year battle with the U.S. government, powerful museums, Native American tribes, and competing paleontologists, they found themselves not only fighting to keep their dinosaur but fighting for their freedom as well.

The storytelling raises more logistical and legal questions than it's equipped to answer. But what Miller does have, for anyone unfamiliar with Sue's fate, is a story with a suspenseful climax.

In his eagerness to create a David-and-Goliath story, and with his distractingly pro-BHI bias, Mr. Miller fails to ask a lot of questions.

The bittersweet end does genuinely unfair things to the heart strings. Do not miss.

The fate of some very old bones may not sound like compelling cinema, but when they compose the 65-million-year-old skeleton of a Tyrannosaurus rex that was 41 feet long and 18 feet high back in the day, all bets are off.

"Dinosaur 13" is "Kramer vs. Kramer" for paleontologists ...

These events would have been better handled in a single installment of Dateline.

Provoking outrage at injustice, Dinosaur 13 is an emotional and inspiring watch for any viewer.

Miller keeps you absorbed in Sue's tale despite the legal shenanigans that take up most of the film; he keeps it simple, focusing on the story of Larson, a passionate, smart and lovable expert.

Riveting entertainment, Dinosaur 13 is one of those happy accidents of documentary filmmaking.

This labor-of-love portrait of those who labor in the dirt for love of dinosaurs is also a chronicle of the ways in which the modern legal system can threaten the preservation of even prehistory.

Any documentary can be slanted to a particular point of view, but most filmmakers try to be a bit more subtle. Cry me a river, "Dinosaur 13."

There are no featured audience reviews yet. Click the link below to see what others say about Dinosaur 13!