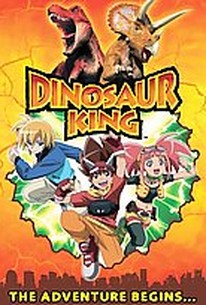 Based on the internationally renowned arcade and collectable card game, the fantasy adventure series Dinosaur King has already evolved into a monster-sized hit. The DVD, featuring the first five episodes (Prehistory in the Making, Battle at the Pyramids, Tanks a Lot!, Bungle in the Jungle, and Rubble Trouble), an exclusive Dinosaur King playing card, and a wealth of bonus features, is certain to excite fans both new and old.

There are no critic reviews yet for Dinosaur King - The Adventure Begins. Keep checking Rotten Tomatoes for updates!

There are no featured reviews for Dinosaur King - The Adventure Begins at this time.