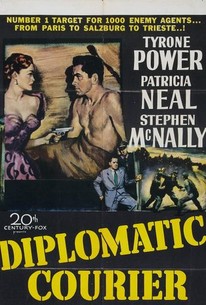 When undercover secret agent Tyrone Power is thwarted in his efforts to obtain a vital document with details of the Russian invasion of Yugoslavia by the death of the courier at the hands of two Russian agents, played by Mario Siletti and Charles Buchinski (aka Charles Bronson), it becomes his duty to go after the murderers and retrieve the papers. With more loops and turnabouts than a snake, the plot has surprises with agents, double agents, mistaken information and is, all in all, a surprisingly exciting spy vehicle. Michael Ansara and Lee Marvin also make brief appearances in this early cold war story. A script with a lot of holes in it is pulled off by the fine performances and tight direction given in this film.

Lee Marvin
as MP at Trieste

E.G. Marshall
as M.P. at Trieste

The film moves along at a breakneck pace, which is to its advantage. Sometimes the intrigue is laid on too thick, but things usually straighten out.

Diplomatic Courier is skillfully made, rich in twists and turns, but totally lacking in significance. This little cinematic escapade never goes beyond what it literally portrays.

Odd mixture of semi-documentary and spy film, with good cast.

Brisk Cold War thriller with Power strong in the lead. A weird bit of billing, Patricia Neal-who looks like a million-has costar billing but her role is small and she's actually support whereas Hildegarde Neff who is listed as a supporting player has the female lead. A decent view.