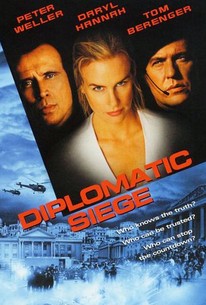 In this action thriller, Steve Mitchell (Peter Weller) is an American agent sent to Bucharest to defuse a bomb located in the U.S. embassy. He's pleasantly surprised to find that Erica Long (Daryl Hannah), his colleague and former girlfriend, will be his assistant for this project, but the fun part of the reunion is cut short when Serbian terrorists attack the embassy and take most of the staff hostage. While Steve and Erica manage to escape, Steve's 14-year-old son is still inside, and he must find a way to get him out before Gen. Buck Swain (Tom Berenger), who was once a schoolmate of the terrorist leader, executes his raid to liberate the embassy, which could prove bloody. Enemy Of My Enemy manages to season its traditional action scenario with moments of dry humor and a dash of romance.

If there's anything sadder than watching once-hot stars toiling in direct-to-video action dreck, it's seeing them barely hiding the fact that they don't care.

There are no featured reviews for Diplomatic Siege at this time.