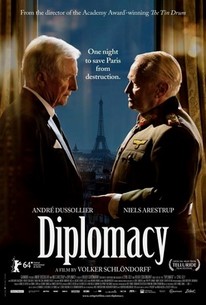 As the Allies march toward Paris in the summer of 1944, Hitler gives orders that the French capital should not fall into enemy hands, or if it does, then 'only as a field of rubble'. The person assigned to carry out this barbaric act is Wehrmacht commander of Greater Paris, General Dietrich von Choltitz, who already has mines planted on the Eiffel Tower, in the Louvre and Notre Dame and on the bridges over the Seine. Nothing should be left as a reminder of the city's former glory. However, at dawn on 25 August, Swedish Consul General Raoul Nordling steals into German headquarters through a secret underground tunnel and there starts a tension-filled game of cat and mouse as Nordling tries to persuade Choltitz to abandon his plan . (C) Zeitgeist

Arestrup and Dussollier are mesmerizing as they attack and parry, argue and counterargue. They reminisce about their lives before the war and wax poetic about their families - then engage in battle again.

A little supporting personality could have made the proceedings feel less like a smartly staged character study and more like a wartime drama.

Diplomacy will work for those who appreciate dialogue-based character films in which plot is of secondary importance.

Although we know what happens, Diplomacy keeps up the suspense and pulls off surprises as Choltitz's decision reaches its inevitable ending.

Its minor thrills come not from not knowing what will happen, but from watching the cagey choreography of two acrobatic minds.

The result is intriguing and intelligent, but ultimately uninspired.

If you dig "talking movies" and want to try something that's not in the American "Sorkin/Mamet" smooth-talk variety, Diplomacy is worth checking out.

Though it tends to be a rather dusty historical drama, Diplomacy isn't without significant merits, a drama depicting the type of barely contained desperation behind what could have been a significant catastrophe.

What might seem like excess staginess in a lesser director's hands becomes excitingly stripped-down here, especially with canny use of a moving camera on a small set, where lighting keeps flickering due to power outages.

This is a game of chess played out by the knights, fearful of the king but strong in chivalric code.

The suspense stems not from the foreseen conclusion, but from the thinking that leads up to it.

The best way to look at his film is as a love story about Paris. One can differ about the interpretation of events presented in the movie. It is hard to disagree about the worthiness of his love.

There are no featured audience reviews yet. Click the link below to see what others say about Diplomacy!