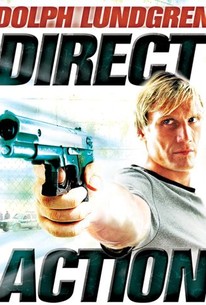 When you blow the whistle on police corruption, you'd better be ready to fight for your life, as honest cop Frank Gannon (Dolph Lundgren) learns in this action-packed effort from veteran director Sidney J. Furie. Though years of service on the Direct Action Task Force have earned honest cop Gannon the respect of his peers, it's every man for himself when Gannon reveals corruption that leads to the highest ranks and the Feds implicate him in a dangerous drug scam. With only rookie cop Billy Ross (Polly Shannon) to back him and less than 24 hours to prove his innocence, Gannon must survive the most grueling day of his life if he is to clear his name and make the guilty pay for their crimes.

Joe Pingue
as US Attorney

There are no critic reviews yet for Direct Action. Keep checking Rotten Tomatoes for updates!

Nope I am correct haha another Dolph film with almost the same name as another Dolph film ('Direct Contact') and its just as bad, cheap, tacky as the other. This time Dolph is exposing crooked cops and...well basically beating and killing everyone in sight without breaking sweat, the usual stuff. Lots of gun fire and lots of missing etc...I dunno how they get funding for this identical cookiecutter stuff.