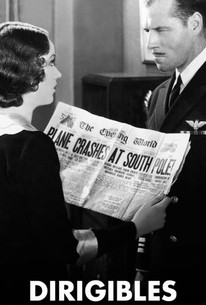 A pair of US Navy pilots, Lt. Cmdr. Jack Braden (Jack Holt) and Lt. "Frisky" Pierce (Ralph Graves), have a longstanding rivalry that cuts across the professional and personal lives. In the air, Braden has set all kinds of performance and endurance records commanding dirigibles, lighter-than-air craft, extending their potential uses and missions in significant ways; meanwhile Pierce, who has a flashier personality, has grabbed the headlines with daredevil stunts that often represent less achievement than sheer recklessness on his part. And on the ground, they've long shared an attraction to Helen (Fay Wray) -- she married Frisky, but now finds she is miserably unhappy as his wife, always playing second fiddle to his stunts and the press corps following him, and constantly worrying about his safety with each new flight. Their conflict comes to a head when both men accept the challenge of reaching the South Pole -- Braden refuses to allow Pierce along, even though his airship will have a plane attached to it and a pilot aboard. His mission ends in failure when a freak storm destroys the dirigible, and Pierce leads the rescue, thus adding to his reputation as a hero and further alienating both Braden and his own wife. Now it's Pierce's turn, flying a tri-motor plane from a forward base in the Antarctic, and he just about succeeds, until his daredevil nature causes a tragedy that not only engulfs him and his crew, but threatens to destroy his wife and Braden as well.

Clarence Muse
as Clarence, The Waiter

The film only truly breathes when it loses itself to its own grandeur and scope.

There are no featured audience reviews yet. Click the link below to see what others say about Dirigible!